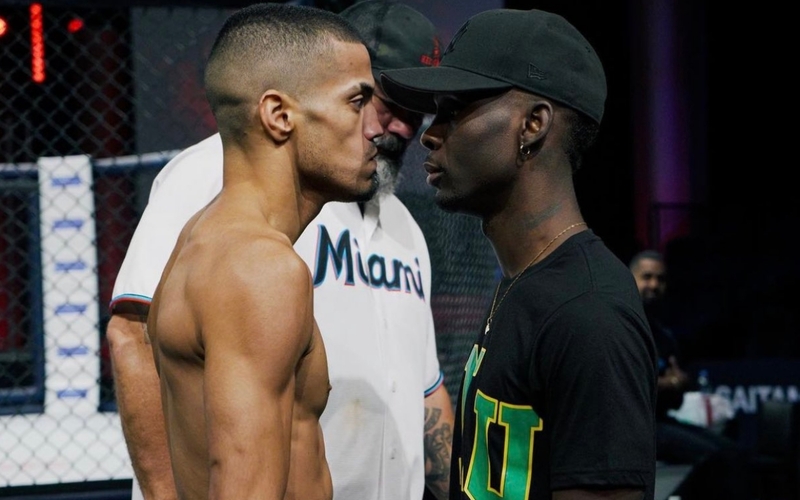 Titan Fighting Championships returns tonight for what will be the only time this August for Titan FC 79: Garcia vs. Findley. The main event will see flyweight prospects Adrian Garcia and Shamel Findley do battle in the Titan FC cage live from the FLXcast Arena in Miami, Fla.

The original Titan FC bantamweight championship main event would have seen incumbent champion Ira Lukowsky defend the belt against Wendel Araujo, but the champion had to be removed from the card earlier this week after testing positive for COVID-19. Instead, fight fans will be treated to a barn-burner between Garcia and Findley that should have plenty of heat  following an intense faceoff at the weigh-ins. The Atlanta-native Findley looked on stoically as Garcia offered up some choice words ahead of their bout, which should have plenty of stakes in tow for whichever man is able to get their hand raised on Friday.

Garcia currently finds himself on a six-fight run with five of his wins coming under the Titan FC banner. As the level of competition has stiffened, the Miami-native has had a tougher time with putting his opponents away, but his power is a serious equalizer at 125 pounds regardless. At 5-foot-8, Garcia is a massive flyweight who leans on power and technique to take care of smaller, faster fighters who tend to bring more of a pace to the fight. He finished Rudy Isidro in just his fourth professional fight with a well timed kick to the body that saw his toes dig into his opponent’s abdominal area not at all unlike the one Tyson Pedro used to finish Harry Hunsucker at last weekend’s UFC 278.

Meanwhile, the less-experienced Findley is certainly capable of putting the pace on his opponents, though he showed great patience, poise and energy management in his last fight, a five-round title fight for the Showcase MMA flyweight championship. Findley defeated his opponent, Randall Austin Jr. by way of unanimous decision in a fight that hit the mat just one time. Prior to that, Findley had been riding a streak of three consecutive knockout victories, two of which had come in the first round. Fans should expect both Garcia and “Badman” to stand toe-to-toe with one another until one man drops or the final bell sounds, whichever happens first.

Neither fighters has any submissions on their professional or amateur record, though if the fight does happen to hit the ground, Findley may be the one to take it there after catching a high kick from Austin and turning it into a trip to close out one of the five rounds in their fight just two months ago. Friday’s fight is scheduled for just three rounds, so it will be interesting to see whether Findley can weaponize his hand speed and pace in his return to three-round competition or if Garcia’s sheer force and striking accuracy will win out.

Friday’s co-main event will see two more flyweights compete when Gustavo Villamil takes on Mike Tubera. Local favorite Villamil (4-2) is a career Titan FC fighter who has seen the greatest amount of success in his young career when the fight hits the mat. His first three victories came by way of rear naked choke within the first two frame, but since then is just 1-2 with his last fight coming by way of his opponent, Chris Johnson, suffering an injury. Tubera (3-2) will be making his Titan FC debut after first-round knockouts at Urijah Faber’s A1 Combat 1 and King of the Cage opened up what has thus far been a busy 2022. “Mean Phillapene” trains with The Fight House out of Ceres, California, and will have an opportunity to turn some heads if he can put on a similarly great performance in his first fight for the promotion.

Moving down the card a third flyweight bout will be contested between Boca Raton, Florida native Ryan Ocasio (1-0) and Springfield, Massachusetts native Israel Henry (0-1). Prior to that, lightweights Bobby Casale (0-1) and Corey Dulaney (3-7) will look to get back on the winning track while American Franklin Torres takes on Cuban Harry Germain in the professional debut for both fighters. Middleweight Eddie Smith will also welcome Josh Mercado to the professional ranks in a fight earlier on the card, and Juan Alvarez (0-1) is set to do the same for fellow American Jesus Borrego at 155 pounds.

Former UFC flyweight and current emerging bantamweight Justin Scoggins was also set to compete on Friday’s card, but a botched weight cut from his opponent, Ryan Kuse, caused the second cancellation of the week.

Bobby Casale def. Corey Dulaney via Submission (RNC) at 2:50 of Round 1

Franklin Torres def. Harry Germain via TKO (punches) at 2:20 of Round 1