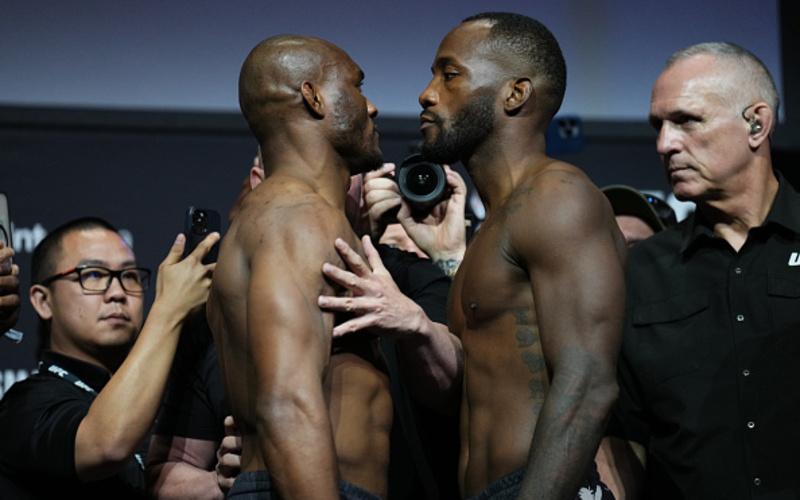 The UFC is traveling to Salt Lake City, Utah this weekend for UFC 278 featuring a welterweight title fight between Kamaru Usman and Leon Edwards. Also on the main card will be some key matchups at middleweight and bantamweight.

The welterweight title fight between Usman and Edwards will be a rematch nearly seven years in the making. When these two first met, Usmam was seven fights into his career coming off his TUF 21 Finale win, while Edwards was twelve fights into his career with four UFC fights behind him. That first meeting happened at UFC on Fox 17 in a fight where Usman went on to win by unanimous decision.

Since then, of course, Usman has continued to win leading up to him becoming the UFC welterweight champion in a unanimous decision win over Tyron Woodley, just over three years after beating Edwards. Since he defeated Woodley to become the champion, Usman has successfully defended his title five times as he goes for number six against Edwards. Among those five defenses, he holds two wins over Colby Covington, one by TKO at UFC 245, the other by unanimous decision in Usman’s most recent fight at UFC 268. He also holds two wins over Jorge Masvidal during that time, with a unanimous decision win at UFC 251 followed by a huge knockout win at UFC 261. In between his fights with Masvidal, Usman defended his title against Gilbert Burns and finished him by TKO in round three at UFC 258.

Like Usman, Edwards has also won every single fight since their first encounter, unfortunately he just did not get the same opportunities as Usman which is why it has taken him so long to fight towards a shot at the belt. In 2018, Edwards’ seemed to have been given better opponents from that point forward. That year, he picked up wins over Peter Sobotta by TKO at UFC Fight Night 127 followed by a UD win over Donald Cerrone in Edwards’ first main event at UFC Fight Night 132. Edwards fought twice again in 2019 where he picked up a split decision win over Gunnar Nelson at UFC Fight Night 147 followed by a unanimous decision win over Rafael dos Anjos in the main event of UFC on ESPN 4.

After the win over dos Anjos, Edwards was to be matched up with former welterweight champion Tyron Woodley. Unfortunately, the peak of COVID was happening at this time and travel restrictions stopped the fight from happening. After that, Edwards was going to face new fast-rising prospect Khamzat Chimaev. They were scheduled to fight multiple times, however each time, Chimaev was forced to pull out because of the effects COVID was having on his body.

Finally, the UFC decided that fight would never make it to fight day and eventually paired Edwards up with Belal Muhammad in UFC Vegas 21‘s main event. That fight ended in a no contest after Muhammad could not continue because of an accidental eye poke in round two. In Edwards’ most recent fight, he picked up a big unanimous decision win over Nate Diaz at UFC 263. Now after all these years, Edwards finally gets another crack at Usman, and this time with a title on the line.

In Saturday’s co-main event, top middleweight contenders face off as Paulo Costa takes on former UFC middleweight champion Luke Rockhold. This fight was supposed to happen earlier this summer at UFC 277 however for unknown reasons, it was moved to UFC 278.

Coming into this fight, Costa is looking to snap a two fight losing streak. He began his career undefeated at 13-0, fighting his way to a title shot with big wins over Uriah Hall and Yoel Romero. Costa fought Israel Adesanya for the title at UFC 253. Unfortunately, he came up short as Adesanya finished him in the second round to retain his title. Following that loss, Costa went on to lose his next and most recent fight, losing by unanimous decision to Marvin Vettori in their main event at UFC Vegas 41. Costa hopes to fight his way back to a title shot but first he will need to get through a former champion to do so.

Also coming into this fight on a two fight losing streak, Luke Rockhold has not fought since July 2019. Rockhold lost the title back in 2016 in a knockout loss to Michael Bisping at UFC 199 right after he had beaten Chris Weidman for it at UFC 194. Since then, Rockhold has fought a total of three times. Just over a year after losing to Bisping, Rockhold returned in a main event fight against David Branch at UFC Fight Night 116. Rockhold won that fight, finishing Branch in round two by TKO. After the win over Branch Rockhold was supposed to face Robert Whittaker for the title. However, Whittaker was forced out of the fight and replaced with Yoel Romero, turning the fight into an interim title fight. That was the first of Rockhold’s losses on his current losing streak as Romero knocked him out in the third round at UFC 221. In his last fight, Rockhold faced Jan Blachowicz in a light heavyweight matchup at UFC 239. Rockhold lost that fight, once again suffering a brutal knockout, this time in round two.

Kicking things off on UFC 278’s main card will be a fight in the light heavyweight division as Tyson Pedro takes on Harry Hunsucker. Pedro is coming into this fight fresh off of a TKO win over Ike Villenueva at UFC Vegas 52 that snapped his two fight losing streak. As for Hunsucker, he is looking to snap a two fight losing streak of his own as he has suffered recent KO/TKO losses at the hands of Tai Tuivasa and Justin Tafa.

Following that fight will be a matchup in the women’s bantamweight division as Wu Yanan faces off against Lucie Pudilova. Yanan is looking to snap a three fight losing streak in this fight as she is coming off decision losses to Mizuki Inoue, Joselyne Edwards, and Mayra Bueno Silva. On the other hand, Pudilova is coming off two straight wins as she makes her return to the UFC following a couple years off in which she compiled a record of 5-1 in another organization. She hopes her second UFC stint will be better than the first after she put together a record of 2-5 during her time with the UFC before.

Finally, before the co-main event will be a big matchup in the bantamweight division as former UFC featherweight champion Jose Aldo faces Merab Dvalishvili. Since Aldo lost to Petr Yan for the vacant bantamweight title at UFC 251, he has not lost another fight. Aldo is on a three fight win streak that includes unanimous decision wins over Marlon Vera, Pedro Munhoz, and Rob Font. Dvalishvili will be looking to pick up a big win that could propel him to a title shot as he enters this fight with seven straight wins behind him. In his most recent outing, he finished Marlon Moraes by TKO in round two at UFC 266.

Follow along with MMASucka as we provide UFC 278 Results throughout the card.

Amir Albazi def. Francisco Figueiredo via Submission (Rear Naked Choke) at 4:34 of Round One
Aoriqileng def. Jay Perrin via Unanimous Decision (29-28, 29-28, 29-28)
Victor Altamirano def. Daniel da Silva via TKO (Strikes) at 3:39 of Round One