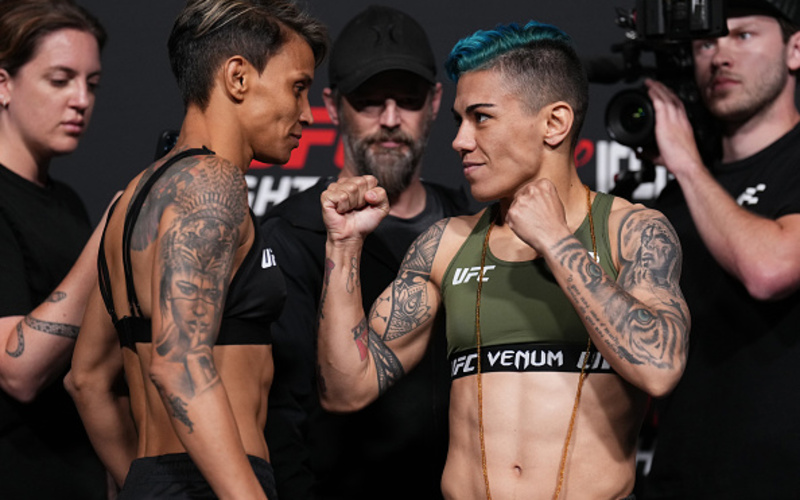 The UFC’s 2022 schedule rolls along in the midst of a busy Saturday in the world of mixed martial arts as former UFC strawweight champion Jessica Andrade takes on a new challenge in the form of rising Brazilian Amanda Lemos. MMASucka is here to bring results from Saturday’s 12-fight card.

Lemos has been one of the fastest risers at women’s strawweight since moving down to 115 pounds back in December 2019. Over that time, the 34-year-old has put together a fight-fight winning streak with finishes in three of her victories. Her most recent win came against Angela Hill in a fight where the official decision was questioned by the fans and media alike. Nevertheless, Lemos showed good resilience in the winning effort and is going to need every ounce of that when she takes on three-division veteran Andrade in what should be a major step up in competition.

Andrade is coming off a first-round TKO over ranked flyweight Cynthia Calvillo after getting finished by UFC flyweight champion Valentina Shevchenko one year ago tomorrow. “Bate Estaca” is still just 30-years-old, however, and could be looking to make another run at the title that once belonged to her. She does, after all, hold a 1-1 record against current champion Rose Namajunas and stands out as the only blemish on the champ’s record in the last six years.

Known for her aggressive, in-your-face style of fighting, Andrade will meet her match in Lemos who brings a similar level of aggression, particularly in the first round where Lemos has seven finishes to her name and Andrade has 10. Both women have suffered knockout defeats before, with Lemos’ lone loss of her career coming against Leslie Smith up at 135 pounds. Like Andrade, Lemos skipped the move down to flyweight altogether, and time will tell if she one day takes a turn up to 125 pounds. For now, she will look to find an effective counter against the former champion and put her out early, a path to victory that Zhang Weili, another former champion was able to find against Andrade. As for the 20-fight UFC veteran Andrade, she may have multiple paths to victory depending on whether she can catch Lemos early, wear her out in an extended fight or use her well-rounded skill set to take a decision in her return to the 115-pound division. Either way, she will want to weather the storm against the less-experienced fellow Brazilian and draw upon the lessons learned in victory and defeat to set herself up for another title eliminator.

Saturday’s co-main event will see upstart Peruvian Claudio Puelles taking on grizzled UFC veteran Clay Guida at lightweight. Guida, a 19-year-veteran of the sport, will attempt to stave off another young up and comer but is actually coming off a victory over Leonardo Santos, a man who is two years his senior. Despite being 40 years of age himself, Guida continues to do what he has always done: weaponize pace and activity inside the octagon en route to a decision victory or finish in the mid-late rounds. “The Carpenter” most recently took a no-gi grappling match against UFC featherweight Billy Quarantillo as part of Fury Pro Grappling 3. Donning a wrestling singlet, Guida maintained top control and defended every submission from the bottom “Billy Q” could hope to throw at him en route to a decision victory.

Guida’s next opponent, Puelles, is no stranger to finding success from the bottom, maintaining an active guard with a variety of submissions at his disposal from a variety of positions. The 26-year-old Peruvian has six submission wins to his name, three of which have come by way of kneebar. Guida, meanwhile, has lost by submission on 10 different occasions, and of those nine have come by way of choke. Puelles most recently submitted veteran Chris Gruetzmacher by way of kneebar back in December but will be a tough puzzle for Guida to solve thanks to a skillset that will have him prepared no matter where the fight goes. The young Peruvian should be content to strike with Guida, but it will be particularly interesting to see how he fares in the later rounds where Guida is able to overwhelm most of his opponents, even in his advanced age. If Saturday’s co-main event sees the third round, look for Guida to assume top control and fend off Puelles’ work from the bottom or fish for a late submission of his own if the chips are down.