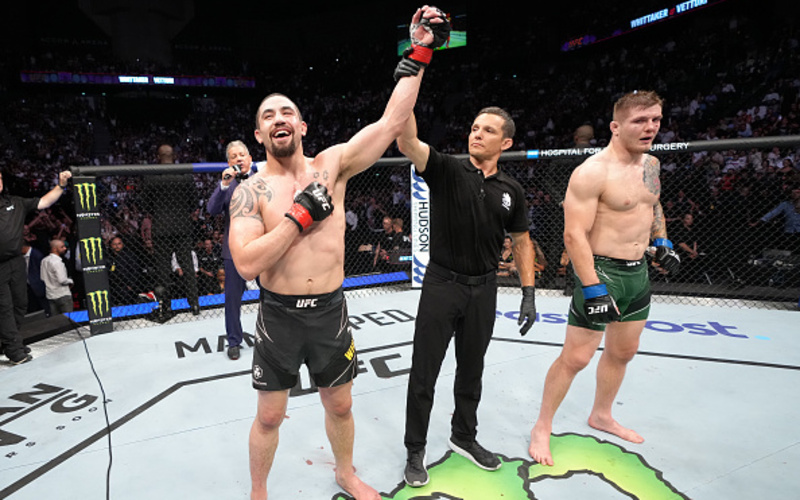 UFC Paris was an amazing event with some truly memorable fights. Those who are victorious will look to further climb up the rankings towards that championship fight and the losers will look to regain the ground that they have lost. This article will look at 5 fighters who fought at UFC Paris and delve into what should be their next move.

After a brilliant performance against Tai Tuivasa where he overcame major adversity in the 2nd round before scoring a highlight reel finish in the third, Ciryl Gane finds himself in an awkward position. He is sat atop the heavyweight rankings, yet a fight against the champion Francis Ngannou looks unlikely. He fought the champ in January of this year, where he suffered a close yet decisive decision defeat. With the division seemingly on a sort of stand-by until the saga of Jon Jones and Stipe Miocic reaches a conclusion, Gane will need an opponent in the meantime to produce another dominant display and to keep himself as the number one contender.

This opponent should be Curtis Blaydes. After an unfortunate accident prevented his fight with Tom Aspinall from truly taking off Blaydes will be on the hunt to regain his place at the top of the heavyweight contender. While Ngannou has beaten him twice Blaydes has only ever lost to one other man in the UFC, Derrick Lewis and before fighting Aspinall had picked up decisive victories over Chris Daukaus and Jairzinho Rozenstruik. If Gane could pick up an emphatic win over Blaydes it would be an extremely impressive scalp to add to his collection and would surely make an excellent case for him receiving the next title shot and a rematch against Ngannou.

Ciryl Gane may have a difficult road back to title contention but it is nothing compared to what Robert Whittaker will have to do for another shot at the middleweight strap. The former champion has lost twice to Israel Adesanya and is left in an extremely difficult position as he looks to be in an elite category compared to the rest of the division yet he has fallen short both times against ‘Stylebender’. His skills are unquestionable as his dominant win over former title challenger Marvin Vettori shows, yet the UFC are not going to give him another shot any time soon. The only way for Whittaker to get back to the title picture is to make the fans want to see him there. If he can deliver big performances and dominate big names as he did to Vettori in Paris, then just maybe he can manage to climb back.

An obvious choice would be Paulo Costa. Ever controversial and ever dangerous, Costa has a loyal following and promotes strong feelings from MMA fans whether they love him or hate him. A cracker of a fight against Luke Rockhold has put the Brazilian back into the middleweight landscape after an extended hiatus from the division and despite his current ranking at number 6, one would suspect that the name would carry more impact than the number beside it. If Whittaker could put on a dominant display against Costa, or even better get a finish over him, it would surely make the public and the UFC begin to believe that it may be worth giving him another shot at the championship

While Robert Whittaker was the middleweight who stole all the attention on the card, it is important to not forget the impressive performance of Nassourdine Imamov. Imamov recorded a convincing decision win over viral knockout sensation Joaquin Buckley and impressed throughout the fight. That win has extended his winning streak to 3 fights, a streak that is composed of names such as Buckley, Edmen Shahbazyan and Ian Heinisch. It is time for Imamov to face some top 10 fighters. He has established himself as a top 15 middleweight and now deserves a chance to break into the top 10 of the division.

A perfect fighter to test Imamov’s abilities would be Jack Hermansson. Hermansson is currently sat at number 8 in the rankings and he is the perfect gatekeeper to the top 10 and perhaps to even higher again. Only the best fighters in the division have beaten the Norwegian with his only losses in the last 5 years coming to Thiago Santos, Jared Cannonier, Marvin Vettori and Sean Strickland. During that time he has picked up wins over Jacare Souza, Kelvin Gastelum, Chris Curtis, Edmen Shahbazyan and Kevin Holland. If Imamov is able to beat Hermansson it would certainly show that he belongs in the top 10 of the division and introduce him to a more casual MMA fan demographic who may not have heard of him yet. Imamov has had 5 fights in the UFC now and is 4-1 in the organisation. It is time for a step up in competition and Hermansson will provide the perfect gauge to test whether he is truly ready for the top fighters at Middleweight. Hermansson is currently booked against Derek Bruson in December.

Despite almost finishing Gane in the 2nd round, Tai Tuivasa was unable to get the job done in Paris and suffered a resounding knockout defeat to Ciryl Gane which brought an end to his 5 fight winning streak. If the Aussie wishes to stay in the upper echelons of the division he is going to have to defend his place. Unfortunately for Tuivasa, a look at the rankings shows that Curtis Blaydes and Sergei Pavlovich are the only viable contenders, both of whom have grappling backgrounds in wrestling and sambo respectively. While Tuivasa may be tempted to drop down and fight some lower ranked opponents in an effort to keep the fight standing, if he wishes to stay at the top end of the division then he is going to have to develop his ground game.

A fight against Pavlovich would make more sense than Blaydes considering the position of both men in the rankings and stylistically would be slightly more in Tuivasa’s favour as Pavlovich seems to be more willing to not rely on his grappling background as much. After a somewhat controversial knockout win over Derrick Lewis Pavlovich finds himself in the top 5 of the division and a win over Tuivasa would surely propel him towards the likes of Gane and Blaydes, likewise the same can be said for Tuivasa with a win in his favour cementing his place inside the top 5 and allowing him to get back to a fight with the top dogs of the division.

After losing emphatically to Robert Whittaker, Marvin Vettori will be looking to bounce back with a win in his next outing. He is still one of the top fighters in the division with the only men he has lost to in the last 4 years being Whittaker and twice to Adesanya. He should not look too far down the pecking order for his next fight and should try and hover around matchups within the top 5.

This would make Sean Strickland an ideal opponent for the Italian. Strickland is coming off a knockout loss to Alex Pereira in what many considered to be a number one contender fight in the summer. He also recently had to pull out of a fight scheduled for October against Jared Cannonier due to a finger infection. A fight between the two makes sense. A win for either fighter is an extremely notable name to their record while a loss is not career damaging either. The timing is right and the rankings are close enough. It just makes sense. This is the fight to make for these two men.