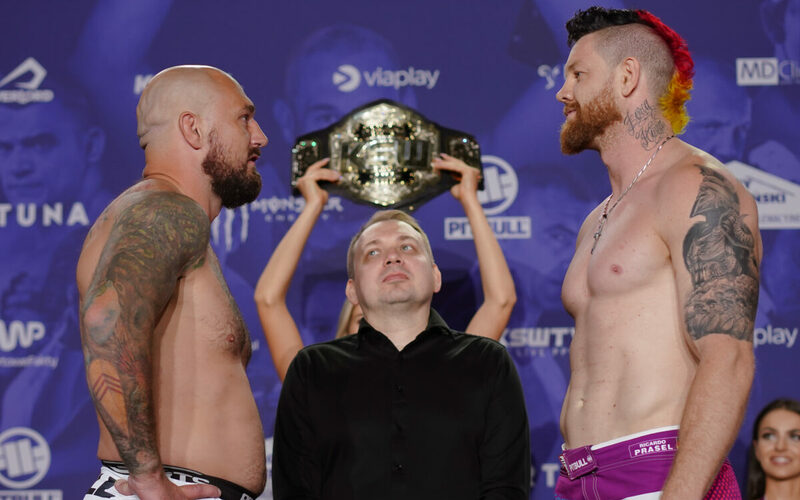 Heavyweight title on the line!! 🏆

The reigning and defending heavyweight champion, De Fries is unbeaten inside the KSW’s circular cage. He won the belt in his promotional debut at KSW 43 by defeating Michał Andryszak. Since then he defeated all six challengers, including such individuals as Karol Bedorf, Tomasz Narkun, Luis Henrique, and Michał Kita. Most of them are former heavyweight champions themselves and Narkun was a then-current light heavyweight title holder. The Brit is currently on an eight-fight winning streak that began by defeating James Thompson at Bellator 191.

Prasel is a former soccer player turned MMA fighter. He played as a goalkeeper for Chelsea F.C. When it comes to fighting, he sports a 13 – 3 record. A Brazil MMA circuit and RIZIN veteran is also unbeaten in KSW. He beat both Kita and former ACA heavyweight title challenger, Daniel Omielanczuk.

The former Olympic wrestler Damian Janikowski will enter the KSW cage for the twelfth time. Most recently he beat Tomasz Jakubiec at KSW 68 with a first round TKO.

Breese is BAMMA, Cage Warriors, and UFC alumni, who has a 14 – 3 record. He had a three-fight winning streak in the UFC, but it was put to an end by Sean Strickland at UFC 199. Later he bounced back between wins and losses and finally was released by the promotion. Now he will make his KSW debut.

KSW 74 will also feature a rematch between Kita and Darko Stosic. The Serbian fighter beat the Pole at KSW 61. There also will be a women’s matchup as Anita Bekus will take on Sofiia Bagishvili.

Tomasz Romanowski def. Cezary Kęsik via TKO (Punches), 3:54 of Round 1

Emil Meek def. Kacper Koziorzębski via TKO (Punches and elbows), 2:01 of Round 2

Borys Dzikowski def. Arkadiusz Mruk via KO (Headkick), 0:40 of Round 1