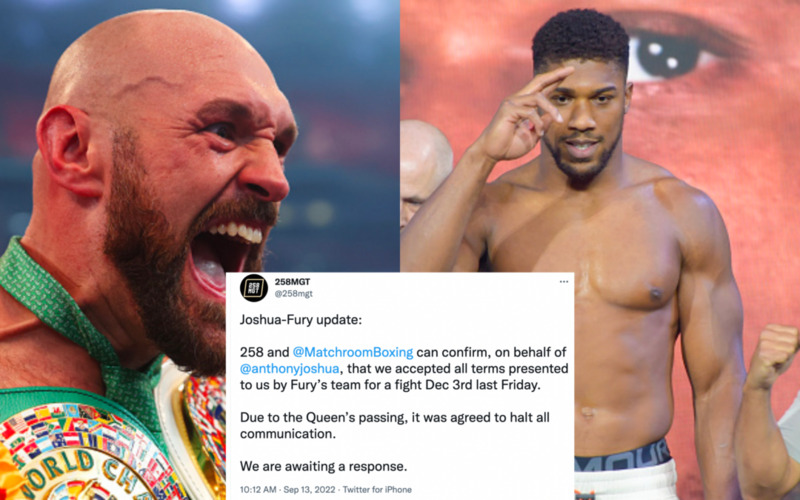 It finally seems to be happening. The battle of Britain, the biggest fight in the heavyweight division between Tyson Fury and Anthony Joshua appears to actually be going ahead. Joshua’s management team, 258 Management confirmed this morning that all terms presented to them for a fight on December 3rd were accepted. Frank Warren of Queensberry Promotions and Fury’s promoter stated that the “contract will be with you very soon” ahead of the potential bout.

Contract will be with you very soon 🥊

We believe that the fight will be taking place on December 3rd and likely be at either Cardiff’s Principality Stadium due to it having a roof or across to Saudi Arabia again. Fury’s terms of 60/40 in his favour with a rematch clause if AJ wins (where the split will be 50/50) seem to be acceptable for Team Joshua.

The broadcaster will likely be a joint BT (Fury) and DAZN (Joshua) PPV with fans being allowed to choose which coverage to watch.

Fury’s WBC belt will also be on the line. Interestingly, this morning, Joshua entered the WBC rankings at #6.

Look who just rocked up at number 6 pic.twitter.com/sWmxEmfPxU

As we know, Joshua’s last fight didn’t quite go to plan as he fell to 0-2 against Oleksandr Usyk. Not only did he lose the fight itself but he lost a lot of fans due to his post-fight antics on the mic. He appeared disrespectful toward Usyk and was clearly frustrated having lost the fight again.

Fury sold out Wembley Stadium in April when he knocked out Dillian Whyte in the sixth round.