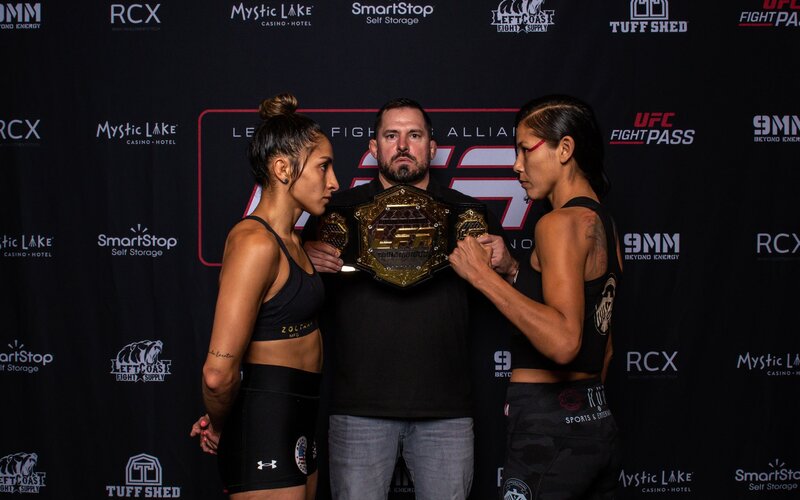 Legacy Fighting Alliance has made its way back to the Mystic Lake Casino Hotel in Prior Lake, Minnesota to present LFA 142: Amorim vs. Nichols. After a much smaller event last week, LFA will have a lot more going on including a strawweight title fight between two of the toughest women in the regional scene. Jaqueline Amorim (5-0) puts her belt and undefeated record on the line to face a very experienced striker in Ashley Nichols (4-3).

Now that the #LFA142 weigh-in is in the books, which fight are you looking forward to most?

After beating all of her opponents in just two minutes or less, Jaqueline “Jacque” Amorim might be the most talented strawweight to ever win an LFA championship. With fighters such as Lupita Godinez, Vanessa Demopoulos, and Piera Rodriguez holding the belt she is in great company and has a very clear path to the UFC. Tonight, however, she faces a talented Ashley Nichols who should be a lot more durable than anyone she’s faced in the cage so far. Nichols started her career in 2013 and has since dabbled in multiple combat sports including a stint as a GLORY kickboxer. Despite her record in MMA, Nichols is a tough matchup for anyone with two of her losses coming from former UFC fighters Randa Markos and Mallory Martin. With valuable experience against fighters from the big show, Nichols is ready to show Amorim what it takes to compete at the next level.

Thomas Peterson (5-1) is back as a co-main event after a very tough loss in against Waldo Cortes-Acosta earlier this year. The former LFA Heavyweight Champion had five first round finishes and was looking pretty untouchable until that loss. After months to reflect and sharpen his game, Peterson is looking to get back on track and remind everyone just how talented he is. After a successful amateur run where he went 9-1, Kory Moegenburg (2-3) has not had the best of luck since turning pro. One of his losses was his pro debut against Brendan Allen where he was finished in the first round. Now at heavyweight, Moegenburg is coming off of a first round finish of his own and is ready to shock the world in his LFA debut.

LFA has plenty of matchups to keep an eye on throughly this loaded event. Sean McPadden (5-1) and Michael Cyr (4-0) make for an intense bantamweight matchup between two lethal finishers who have never seen the scorecards in their pro careers. Another BJJ star in Giovanna Canuto (3-0) faces her toughest test in MMA when she fights Dana White’s Contender Series veteran Jamie Colleen (5-3). There’s also a preliminary bout between Dan Moriarty (2-0) and Oscar Jurado Sanchez (2-0) as both fighters look to maintain there unbeaten streak and secure another finish.

MMA Sucka will have live coverage for LFA 142: Amorim vs. Nichols as it airs live on UFC Fight Pass at 9pm E.T./6pm P.T.