How to Fix Fighters Missing Weight in the UFC 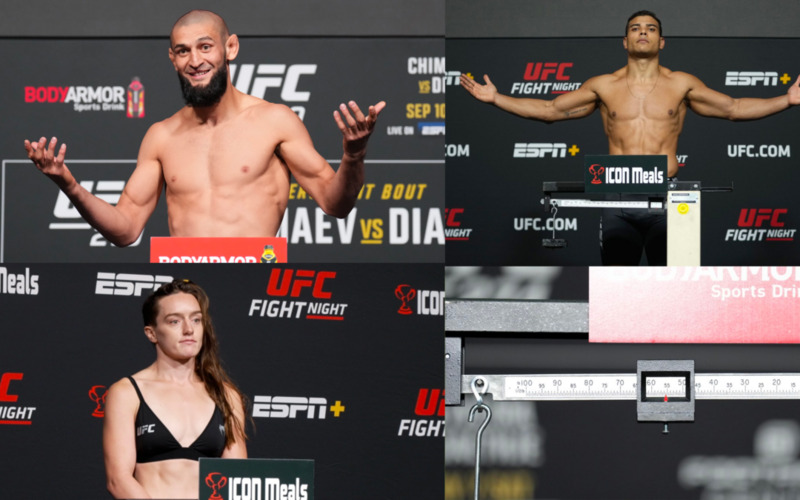 The Friday weigh-ins during fight week have captured the headlines for the second week in succession. Last week during UFC 279‘s weigh-ins, we had carnage due to weight-cutting issues. The main event, co-main event and third fight on the main card were all changed, two fighters missed weight and one fight weight was changed prior to weigh-ins due to a fighter being unable to make weight.

The same happened this week as Aspen Ladd, a woman who is notorious for struggling with her weight, again missed weight, coming in two lbs over the non-title bantamweight limit.

Previously, Ladd missed weight in Invicta FC and she missed weight in her third UFC bout, leading to the fight being cancelled. In her first main event, she hit the bantamweight limit of 136lbs, however, she had a visible awful weight cut. When stepping on the scale, she was trembling, wincing and in obvious pain. The commission cleared her to fight, however,  she went on to lose the fight in just 16 seconds, bringing into question just how much the weight cut affected her punch resistance. It was revealed afterwards that she had gained 18% of her weight between weigh-ins and fight night (weighing in at 159lbs) and therefore had her license suspended. The California State Athletic Commission have a rule that fighters cannot gain more than 10% of their fight week between weighing in and fighting.

Another weight miss came when Ladd was scheduled to face Macy Chiasson. Ladd weighed in at 137lbs and was withdrawn from the fight due to medical concerns. She briefly moved up to featherweight to take on Norma Dumont, however, having lost convincingly, she looked to try her hand down at bantamweight again, but as we know, this didn’t go to plan.

In recent times, we have seen Paulo Costa admit (during fight week) that he wouldn’t be able to make the middleweight limit when scheduled to face Marvin Vettori, forcing the fight to be moved up a weight class to light heavyweight during fight week. William Knight broke the record for the biggest weight miss in UFC history when he missed weight by 12lbs back in February. In December of last year, we saw Justin Tafa miss the heavyweight limit of 266lbs, something that we hadn’t ever seen before. These issues have all come within the last 12 months, so something needs to be done.

What happens at the moment?

As it stands, fighters often get an additional hour to attempt to make the weight if they miss it on their first attempt. The hour is usually enough time to cut an additional one or two pounds, however, sometimes the fighter fails on their second attempt.

If they do fail to make weight, they will be fined a percentage of their purse. The commission will decide on the amount that the fighter will be fined and it will be either 20% or 30% depending on how much they missed by. They will also then be ineligible for a post-fight bonus, regardless of their performance.

This is all assuming that their opponent accepts a catchweight fight, which we know isn’t always the case.

How to Fix Weight Misses

Fighters missing weight is a huge issue. It leads to the integrity of weight classes being questioned (if Costa had beaten Vettori at 205lbs, how does that affect his middleweight ranking?), danger to the opponent as well as potential carnage (as we saw at UFC 279) to an entire card.

If a heavier fighter is punished more severely for missing weight, the fewer fighters we’ll see coming in heavy. As it stands, although fighters who miss weight do suffer consequences, none of these fines actually affect them in the fight itself.

There has to be a change as to how fighters are punished for missing weight and here’s what we suggest:

Maintain the current system of fining a fighter either 20% or 30% depending on the severity of the weight miss. Still ineligible for post-fight bonuses and enforce a hydration clause, (fighter must not weigh more than 5% of their weigh-in weight on fight night)

Fine 50% of fight purse, enforce strict hydration clause again and start the fight a point down (fighter can only gain nine points from the first round, regardless of whether they win the round)

3rd time and every subsequent time –

Fine 50% of fight purse, enforce strict hydration clause and start the fight two points down (fighter can only gain nine points from the first two rounds, regardless of whether they win the round)

Any weight miss of 5lbs or more will force the fighter to fight at the weight class above in their next bout. Any misses of 7.5lbs or more, the fight will be scrapped regardless of whether the opponent accepts the fight or not.

With rules as strict as this, both monetary as well as potential career-altering and fight-altering consequences, there is a much higher chance that fighters will put more emphasis on their nutrition and their weight-cutting process.

The UFC should also introduce strict hydration tests during the two months prior to fight week. Eight weeks out from fight night, fighters should have to weigh within 20% of their fight weight. Entering fight week, fighters should weigh no more than 7.5% over their fight weight. So for example, Aspen Ladd would have to weigh in on the Monday of fight week would have to weigh in at 142.8lbs. This would mean that she would gradually cut weight down to the 136lbs limit during fight week, meaning that it would be a lot safer for her and make it more likely that she’ll make the weight on Friday’s weigh-ins.

And while we’re discussing the matter, it’s about time we got rid of the historic weighing scales used today in the UFC. Use analogue weight scales in order to eliminate any human error, especially with potentially stricter rules for missing weight…