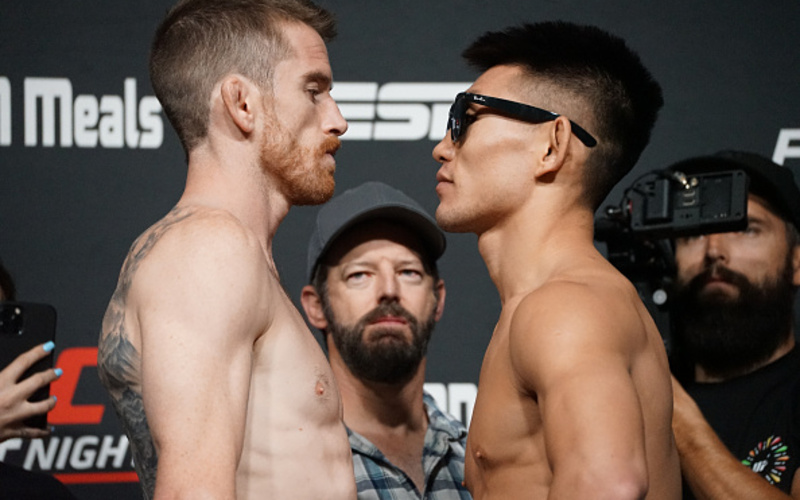 After quite an eventful UFC 279 fight week, the UFC is back in the Apex this weekend as bantamweights collide in the main event while MMASucka provides UFC Vegas 60 results throughout the evening.

In Saturday night’s main event, top ten bantamweights collide as former interim title challenger Cory Sandhagen takes on Song Yadong. Sandhagen has had a pretty solid UFC career as he kicked things off with five wins from 2018-2019 which included TKO wins over Austin Arnett and Iuri Alcanatara, as well as a submission win over Mario Bautista followed by two decision wins over John Lineker and Raphael Assuncao.

Sandhagen suffered his first loss in the UFC, and only second loss professionally, in a fight against Aljamain Sterling at UFC 250. In that fight, Sterling finished Sandhagen by submission due to a rear naked choke in just the first round. Of course, following that, Sterling went on to become UFC bantamweight champion following a series of fights with Petr Yan.

After his loss to Sterling, Sandhagen was able to bounce back with back-to-back KO/TKO wins. The first of those was against Marlon Moraes in Sandhagen’s first main event at UFC Fight Night 179. He finished Moraes by TKO in that fight with a spinning wheel kick and punches that followed. After that win, Sandhagen picked up a knockout win over former UFC lightweight champion Frankie Edgar with a flying knee at UFC Fight Night 184.

Unfortunately, since his win over Edgar, Sandhagen has lost his last two straight going into his fight with Song Yadong. The first of those was in another main event fight as this time, Sandhagen faced former bantamweight champion TJ Dillashaw. Sandhagen lost that fight by split decision before he went on to lose another decision, this time to Petr Yan in an interim title fight at UFC 267. Sandhagen hopes to snap his losing streak and get back on the road to a title but he has a tough test in his way with Song Yadong.

Song Yadong enters his fight with Sandhagen on a three-fight win streak. Overall in the UFC, Song has put together a record of 8-1-1. Three of his first four fights in the UFC ended in a finish including a knockout win over Alejandro Perez at UFC 239. The fight that followed his win over Perez is where the draw happened as he fought to a tie with Cody Stamann at UFC on ESPN 7. After that, Song picked up his biggest win yet at the time when he defeated Marlon Vera by unanimous decision in a very close fight.

Song lost his first UFC fight in his next outing when he suffered a unanimous decision loss to Kyler Phillips at UFC 259. Since then, Song has won three straight fights. The first of those, following the loss to Phillips, was a split decision win over Casey Kenney at UFC 265. He then went on to finish Julio Arce in his next outing by second-round TKO at UFC Vegas 42. In his most recent fight, Song picked up the biggest win of his career when he finished Marlon Moraes by first-round knockout at UFC Vegas 50. With a win over Sandhagen, Song hopes to find himself in the top five of the division next week.

In the co-main event for UFC Vegas 60, middleweights collide as Chidi Njokuani takes on Gregory Rodrigues. Njokuani is still fresh into his UFC career as he made his UFC debut earlier this year following a successful showing on Dana White‘s Contender Series just over a year ago. In that fight, he finished Mario Sousa by TKO in the third round.

He made his debut at UFC Vegas 47 when he finished Marc-Andre Barriault by knockout in sixteen seconds. Following that win, in his most recent fight, Njokuani picked up another first-round knockout finish over Dusko Todorovic at UFC Vegas 55.

As for Rodrigues, he is also relatively fresh into his UFC career as he made his debut in June 2021. He made an appearance on the Contender Series in 2020 but ended up losing that fight to Jordan Williams by first-round knockout. Rodrigues picked up back-to-back knockout wins in LFA following the unsuccessful Contender Series appearance.

Following those wins, Rodrigues made his UFC debut as a short-notice replacement to face Dusko Todorovic at UFC Vegas 28. Rodrigues won that fight as he defeated Todorovic by unanimous decision. He followed that up with a knockout win over Jun Yong Park at UFC Vegas 41. Rodrigues suffered his first loss in the UFC when he lost a split decision to Armen Petrosyan at UFC Vegas 49. In his most recent outing, Rodrigues bounced back from that loss with a first-round KO win over Julian Marquez at UFC on ESPN 37.

Kicking things off on Saturday for UFC Vegas 60 will be a fight in the middleweight division as Anthony Hernandez takes on Marc-Andre Barriault. Hernandez looks to extend his current win streak to three in this one as he enters with a recent submission win over Rodolfo Vieira at UFC 258 followed by a unanimous decision win over Josh Fremd at UFC 273. Barriault looks to make it two in a row as he enters this one following a recent win over Jordan Wright by submission at UFC Vegas 52.

Following that fight will be a heavyweight matchup between Tanner Boser and Rodrigo Nascimento Ferreira. Boser makes his first appearance in just over a year as he is coming off a knockout win over Ovince Saint Preux at UFC Vegas 30. Nascimento, on the other hand, will be looking for his first win since 2020 as he comes into this one following a KO loss to Chris Daukaus as well as a no-contest with Alan Baudot that was a win for Nascimento originally, but was overturned after a failed USADA test.

The third fight on the main card will feature another middleweight fight as Joe Pyfer faces Alen Amedovski. Pyfer will be making his UFC debut in this fight as he is coming off a good outing on the Contender Series in which he finished Osman Diaz by TKO in the second round to earn himself a UFC contract. As for Amedovski, he is still looking for his first win in the UFC as he has lost three straight coming into this one. Those three losses include a UD loss to Krzysztof Jotko at UFC Fight Night 149 followed by a first-round KO loss to John Phillips at UFC Fight Night 160, and finally, in his last outing, he lost by submission in round one against Joseph Holmes at UFC Vegas 55.

Finally, before the co-main event goes down, featherweights Andre Fili and Bill Algeo face off. Fili has been struggling a bit lately as he has not won a fight since 2020 when he defeated Charles Jourdain by split decision. Since then, he has lost a UD to Bryce Mitchell at UFC Fight Night 181, followed by a no contest against Daniel Pineda that ended due to an accidental eye poke. In his most recent fight, Fili was finished by TKO in 41 seconds against Joanderson Brito at UFC Vegas 53. His opponent, Bill Algeo, will be entering this fight on a two fight winning streak that includes a UD win over Brito at UFC Vegas 46, followed by a TKO win over Herbert Burns at UFC on ABC 3.

Follow along with MMASucka as we provide UFC Vegas 60 Results throughout the card.