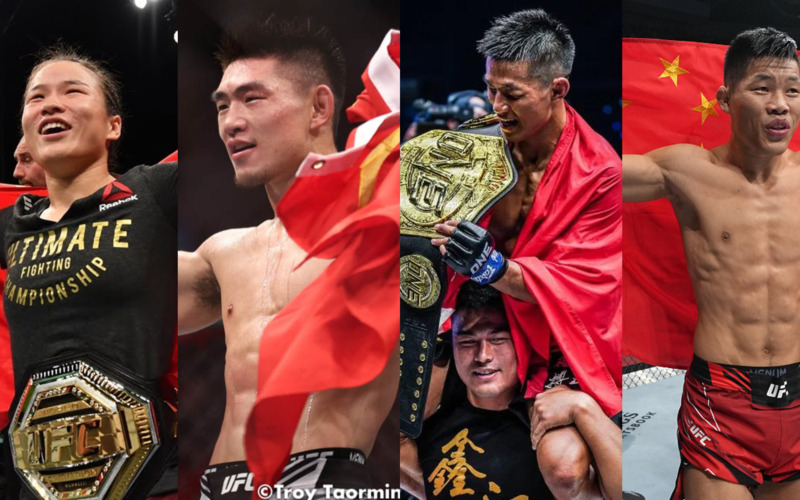 China has a long history of incredible contributions to martial arts. While Mixed Martial Arts is not a mainstream sport in the nation of China yet, the country has still contributed some stunning must-watch fighters to MMA. These are the top five must-watch Chinese MMA fighters.

The top-ranked UFC welterweight “The Leech” Jingliang Li has put on some incredibly exciting performances in the octagon. Notably, he has defeated quality fighters such as Elizeu Zaleski, Santiago Ponzinibbio, and Muslim Salikhov, all via KO/TKO. In fact, over 70% of this Chinese MMA fighter’s wins have ended in a finish. He has shown impressive improvement with his footwork and his heavy hands. Win or lose, Jingliang Li is always a must-see MMA.

“The Hunter” Xie Wei is a former Shaolin Monk. He was even an instructor at the legendary and ancient Shaolin Academy, teaching Kung Fu. Since switching his focus to MMA he has found resounding success. The former Shaolin Monk truly lives up to his “Hunter” moniker as over 70% of his victories were earned via KO/TKO. Xie Wei is a dangerous fighter, with crisp hands and perfect kicks, and is always aiming for a finish. His next bout in ONE Championship is not yet scheduled however, once he is booked, it will be an exciting showdown.

“Magnum” Weili Zhang has been in some of the most exciting wars in UFC history. Her name is synonymous with unforgettable moments in MMA. Zhang is the former UFC Women’s Strawweight Champion with impressive wins over Joanna Jędrzejczyk and Jéssica Andrade. This 33-year-old fighter packs power in her hands and feet impressively having won half of her bouts by KO/TKO. Her next bout will see Zhang look to claim her former world title when she faces Carla Esparza at UFC 281 on November 12.

Tang Kai is the newly crowned ONE Featherweight World Champion. This Chinese-born athlete recently out-pointed the then-champion, Thanh Le, in an impressive five-round war. Leading up to this fight Tang was best known for his thunderous power. He is currently on a 10-fight win streak with seven of these bouts being won by way of KO/TKO. Overall in his career, he has an exceptional 80% finish rate via KO. At merely the age of 26, he will be one to keep an eye on.

The UFC’s bantamweight division is stacked with impressive talent and Song Yadong is a great addition to the mix. This Chinese-born fighter has been improving in multitudes in between his bouts. At just the age of 24, “The Kung Fu Kid” is still years away from reaching his prime fighting form. Thus far in the UFC, he has earned notable wins over fighters such as Casey Kenney, Marlon Moraes, and “Chito” Marlon Vera. Later this evening, September 17, he will face the stiffest of his career when he fights the top-ranked Cory Sandhagen in a five-round main event. This athlete is always an exciting fighter who has excellent potential.

The 6x ONE Women’s Strawweight World Champion with power in her hands. She will next face Angela Lee at ONE on Prime Video 2 on September 30.

“The Fighting Rooster” Zhang Peimian is a kickboxing phenom. At just the age of 18, he made his ONE Championship debut and impressed audiences with his incredible hand speed.