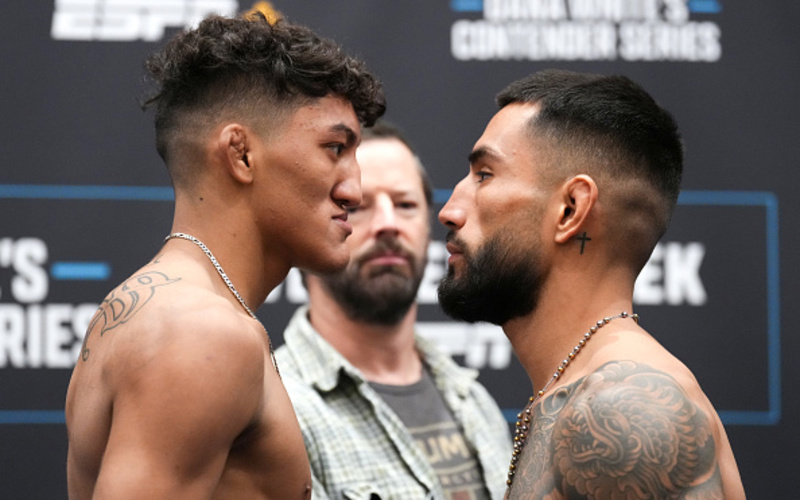 Two events remain for a promotion in 2022 as our MMASucka staff picks nears the end of the month.

Dana White’s Contender Series 55 is set for action tonight, September 20 from the UFC Apex in Las Vegas, Nevada. The event comes as the ninth straight Tuesday fight card of ten total cards in what is the sixth yearly season of competition. Five fights will take place at the event beginning at 8:00pm ET (5:00pm PT) for subscribers on ESPN+.

Live results from Dana White’s Contender Series 55 will be available here at MMASucka.

Also, be sure to recap our staff picks from Saturday the 17th’s UFC Vegas 60 event from Las Vegas.

Ten fighters from around the world will look to impress Ultimate Fighting Championship President Dana White and company as they target the ultimate goal of securing a promotional contract.

Middleweight (185 pounds) hopefuls Leon Aliu and Brunno Ferreira are set for three rounds in the featured main event of the night. Italy’s Aliu showed his finishing ability in his May fight against Cage Warriors veteran James Webb securing a sub-two minute knockout. Ferreira, training alongside the likes of Daniel Acacio and coach Andre Dida at Evolucao Thai MMA, looks to remain undefeated currently at a 100% finishing rate through eight fights.

A historical bout it could be in the co-main event as Raul Rosas Jr. takes on Mando Gutierrez in the bantamweight division (135 pounds). Rosas Jr. will be the youngest fighter in Contender Series history at 17 years old and, with a contract, would become the youngest fighter signed in UFC history. Gutierrez, another youthful rising contender at 25, looks to stop the hype in search of his fourth straight victory and third within the past non-calendar year.

Who are the MMASucka staff picking to win at Dana White’s Contender Series 55?