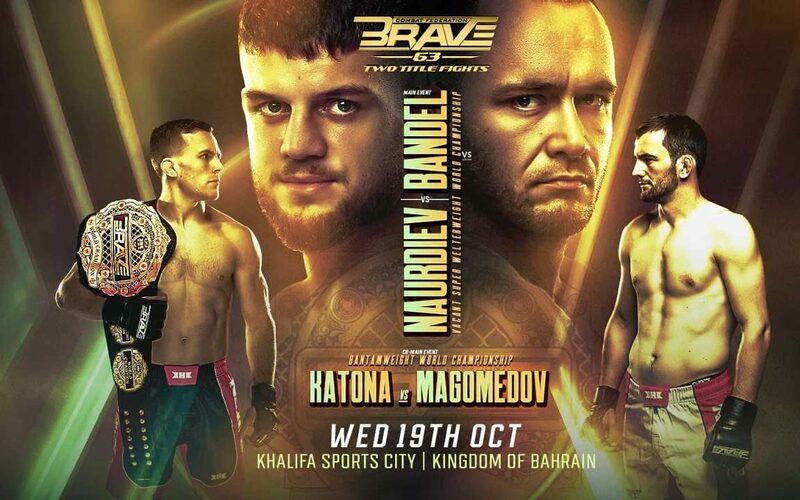 BRAVE Combat Federation is set to return with a two-card week beginning on Wednesday, Oct. 19 with BRAVE CF 63. The event will emanate from Khalifa Sports City Arena in Isa Town, Bahrain, and is set to be headlined by a pair of title fights.

Wednesday’s show will end with a bang when UFC alum Ismail Naurdiev (22-5) battles Marcin Bandel (21-7-1) for the vacant BRAVE CF super welterweight championship. Naurdiev, who is known to fight fans as “The Austrian Wonderboy,” rode his kick-intensive style to immediate success in MMA, compiling a 16-2 record through his first 18 fights. He made his UFC debut against “Trator” Michel Prazeres, outstriking the veteran en route to a unanimous decision victory. However, Chance Rencountre exposed the Austrian’s grappling in the youngster’s ensuing fight, and he went on to achieve a 2-2 record before being ousted by the promotion after a loss to current welterweight contender Sean Brady.

Now 26, Naurdiev has since gone 2-1 since signing with BRAVE and will get his first shot at gold on Wednesday when he faces Bandel, a two-fight veteran of the UFC currently riding a three-fight win streak. Bandel will pose problems on the ground; he has won by submission in 18 of 21 career victories with a whopping eight heel hooks. If Naurdiev can keep upright, however, he could stand a good chance at the knockout as Bandel has been finished by strikes at least three times in seven defeats.

Another UFC veteran will be in action on Wednesday as Canadian Brad Katona (11-2) will look to defend his BRAVE CF bantamweight championship against Bahrain’s own Gamzat Magomedov (7-1). Katona, who trains under John Kavanaugh at SBG Ireland, earned his way into the UFC on The Ultimate Fighter: Undefeated, the season where each of the contestants entered the show unbeaten in their MMA careers. Katona kept his undefeated record in tact by winning the show’s featherweight tournament, but ran into hard times with losses to current UFC bantamweight contender Merab Dvalishvili and Hunter Azure.

Following a near two-year hiatus from fighting, Katona returned to the cage a changed fighter, and has thus far been on a tear in BRAVE CF. He is 3-0 since coming over the to the Middle Eastern-based promotion and last won a split decision over Hamza Kooheji to take home the vacant bantamweight championship. He will now look to defend his title against Magomedov, a Russian-born ground specialist. Magomedov is a near-career fighter for BRAVE having fought for the promotion in six out of seven of his professional bouts. His only loss came at the hands of UFC flyweight JP Buys. Both fighters will be looking across the cage at perhaps the toughest test of their respective careers, and the winning fighter could be the one who is able to implement their game plan quicker.

Three fights will precede Wednesday’s title fights. Pakistan’s Abbas Khan (3-1) will kick off the card against Italy’s Michael Reali (2-1) in a welterweight bout. Khan is currently riding a three-fight winning streak while Reali will be making his debut for BRAVE. A featherweight bout between veterans Marcos Vinícius Costa (10-5) and Nemat Abdrashitov (17-8) will follow, as both fighters look to continue their respective winning streaks of five fights or more. Lastly, Finland’s Olli Santalahti (13-4) and Russia’s Kamal Magomedov (9-0) will collide at super welterweight.

Marcin Bandel def. Ismail Naurdiev via Submission (Armbar) at 1:17 of Round 1 — for the vacant BRAVE CF Super Welterweight World Championship

Kamal Magomedov def. Olli Santalahti via TKO (Doctor Stoppage) at 1:11 of Round 3

Nemat Abdrashitov def. Marcos Vinicius Costa via Knockout (right hook) at 2:51 of Round 2

Abbas Khan def. Michael Reali via Submission (Armbar) at 3:06 of Round 1