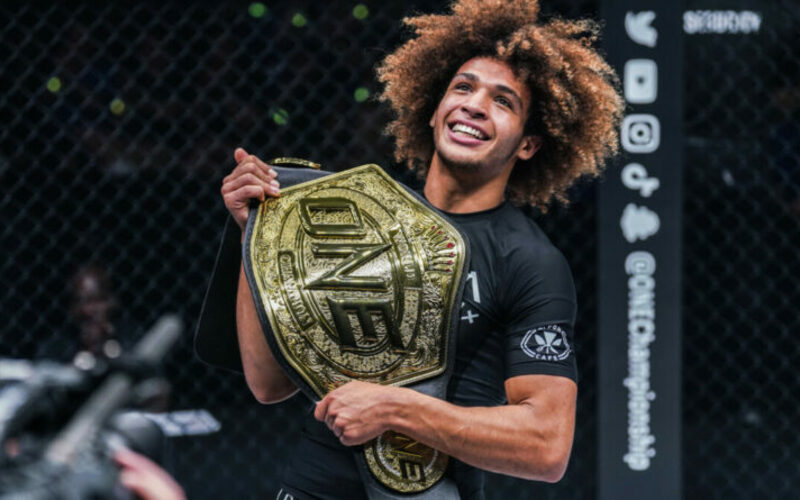 Kade Ruotolo had already set the grappling scene on fire by becoming the youngest-ever ADCC World Champion. At ONE on Prime Video 3: Lineker vs. Andrade, he added more fuel to the flame by becoming the inaugural ONE Lightweight Submission Grappling World Champion with a swift submission over Uali Kurzhev. Both accomplishments are held in the same esteem for the talented teen.

“It’s right there at the top. It’s got to be. To me, ONE is the biggest platform of martial arts. And you know, winning this belt for ONE is right there with my ADCC title. I’m not going to put one over the other, It’s right there with it, and I’m so relieved, so thankful. This is one of my biggest accomplishments yet,” said Ruotolo.

The match began as Ruotolo expected, with Kurzhev being aggressive. However, an early sweep from the Russian caught him off-guard and sent him to the canvas. But the Southern California native was quick to right the ship and get on the offensive. The small adjustments allowed him to seize control and end the match.

Now sitting atop the lightweight division, Ruotolo is looking toward his next challenge. In his post-match interview, one name that Ruotolo mentioned was Tommy Langaker. The Norwegian grappler made his debut in ONE Championship earlier in the year with a decision win over Renato Canuto. It is a matchup that has already stoked the interest of both parties.

“It was nothing too crazy. Nothing too personal. It was like, afterward, there were talks about maybe I think this match would be coming with me and Tommy, something happens. And the after party, he was like, yeah, when are we going to go? I think we were all a bit woozy. It was a bit of a crazy night, but it was no foul play, really. It was cool, but at the same time, he came at me with interesting energy, I’d say, and he kind of fired me up to have a match with him,” said Ruotolo.

But there is another interesting name that is capturing the attention of the 19-year-old. Among the list of possible contenders is his brother, Tye Ruotolo. Having already lost grappling matches to him, Kade is not shy in saying he would love to defend his title against his sibling and notch a win over him on the global stage.

“I know he’s looking at me right now. He’s definitely got a possible matchup in December. We’re hopeful that we both get on that same card if we can. And who knows if we both get some wins, it’d be pretty crazy to see him challenging me for this. We fought twice before, and technically he has two wins over me, so I definitely need to get that one back,” said Ruotolo.

After claiming ADCC and ONE gold, Ruotolo says he is the hunted instead of the hunter. It is an interesting position to be in before he even hits 20 years old, but that is a credit to how both he and his brother have changed the world of jiu-jitsu. Ruotolo is showing no signs of slowing down and is already eyeing a quick return against all challengers.