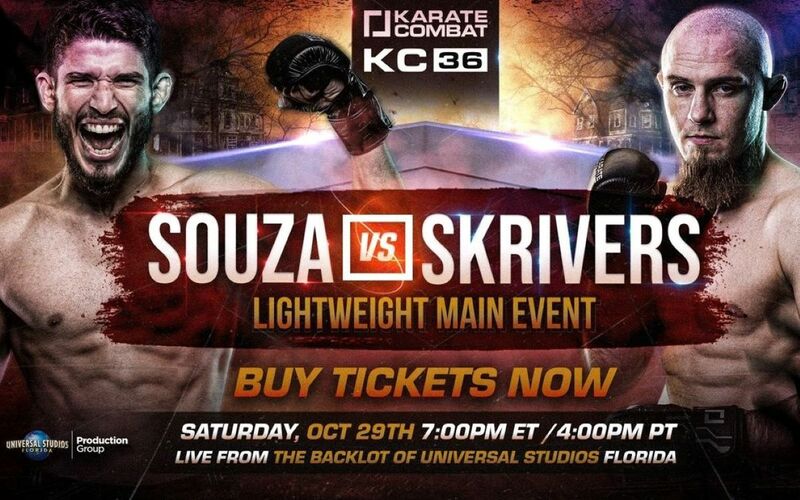 Karate Combat returns to the backlot of Universal Studios in Orlando, Florida tonight as Karate Combat 36 is set to take center stage.

The main event is set to be a lightweight title eliminator between UFC veteran and former LFA champion Bruno Souza and former Karate Combat lightweight champion Edgars Skrivers. The 26 year old Brazilian “Tiger” Souza is a protege of former UFC light heavyweight champion Lyoto Machida, and scored a dominant victory in his promotional debut at Karate Combat 35 after a winless two-fight run in the UFC. After a 16-4 MMA career, the 31 year old Latvian “Bearslayer” made the move into The Pit, winning his first four fights and capturing the lightweight belt before losing it to Luiz Rocha in a rematch back in May.

For the second straight event, Franklin Mina will get co-main event billing, this time taking on Igor de Castaneda, who also has a 3-3 record in the promotion. The Ecuadorian “Bullet” Mina faced the debuting Raymond Daniels in the aforementioned Karate Combat 35 co-main event, and was shut down for most of the fight. “The Iberian Bull” de Castaneda will also be a fighter looking to rebound from a loss after suffering a stoppage defeat to now-champion Ross Levine earlier this year.

Former UFC lightweight and welterweight contender James Vick will make his promotional debut tonight, as he is set to face Jorge Perez in a featured fight. After a four fight losing skid to end his UFC career, three of which came via KO/TKO, “The Texecutioner” Vick then suffered another KO loss to Andre Fialho in the main event of XMMA 1 and subsequently retired from MMA. He returned to fighting back in March, stepping into the boxing ring and going 2-1. The Dominican “El Pra” Perez, meanwhile, holds a 2-2 record in the promotion, most recently suffering a KO loss to the aforementioned de Castaneda.

Igor de Castaneda def. Franklin Mina via KO (Overhand Right) at 1:48 of Round 3

Fernando Paz def. Diego Avendano via KO (Overhand Right) at 1:25 of Round 2

Elvin Aghayev def. Chayil Calaway via TKO (Right Hook) at 2:35 of Round 3

Kenji Grillon def. Nikos Gidakos via TKO (Corner Stoppage) at 3:00 of Round 2