De Ridder vs. Malykhin Booked For ONE on Prime Video 5 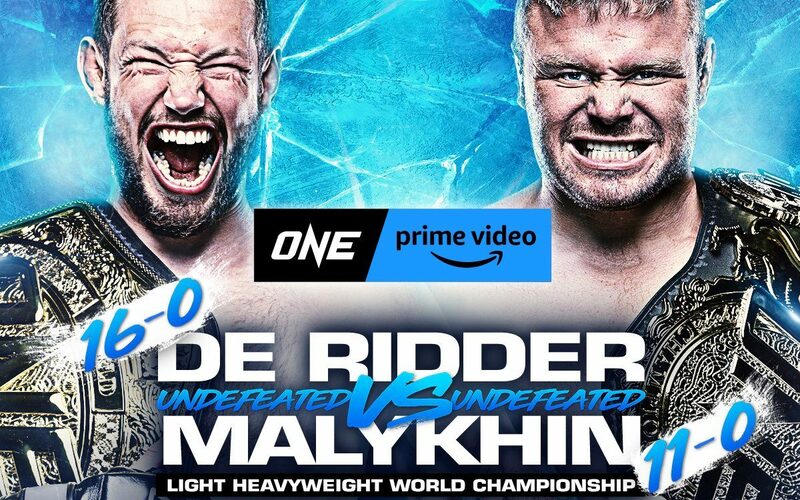 ONE Championship revealed its colossal main event for ONE on Prime Video 5. Shining brightly on the marquee will be the return of ONE Middleweight and Light Heavyweight World Champion Reinier De Ridder, defending his light heavyweight gold against interim ONE Heavyweight World Champion Anatoly Malykhin. The battle of undefeated champions will go down in Manila on Friday, December 2, at the Mall of Asia Arena.

De Ridder will step inside the Circle for the first time since defending his middleweight crown against Kiamrian Abbasov. The Dutchman holds a perfect 16-0 record and has been untouchable since arriving in ONE. De Ridder has defended the middleweight title twice, but the matchup with Malykhin will mark his first light heavyweight defense.

“The Dutch Knight” has always called his shot. First, it was for middleweight and light heavyweight supremacy, but then he turned his attention toward the heavyweight division. Although this will not be for the heavyweight gold, it will be against a heavyweight titleholder. De Ridder can make a huge statement with a win and further his quest to become the first-ever three-division World Champion.

But taking out Malykhin will not be easy. The Russian has a strong wrestling base that could allow him to keep the action standing against the rangy Dutchman. If that happens, Malykhin’s power could be the difference. The interim ONE Heavyweight World Champion has brutalized opponents with his power thus far, and he hopes to continue to do so in order to make himself a two-division king.

The massive matchup of undefeated stars will help ONE round out the 2022 campaign in a major way. One of the sport’s most spectacular undefeated athletes will leave Manila with a mark in the right side of the column. De Ridder and Malykhin have never shied away from a challenge, and their meeting on December 2 will test both men like never before.