Bibiano Fernandes On ONE on Prime Video 4: “The Bibiano Era Will Not Stop Here” 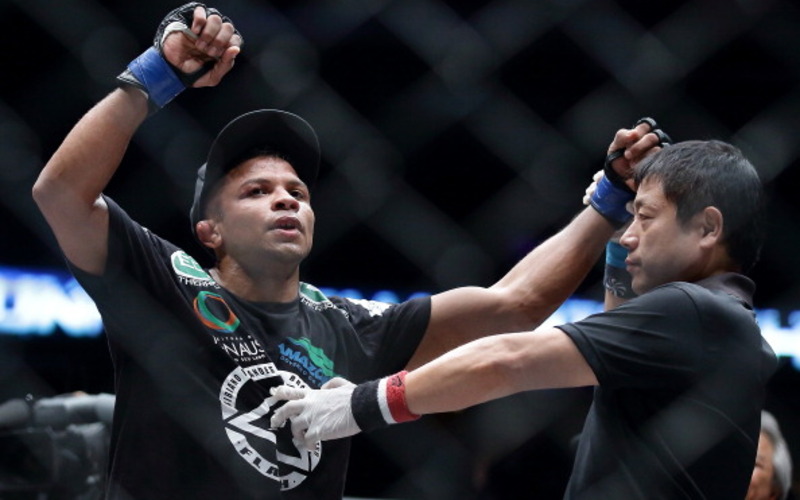 Bibiano Fernandes suffered a knockout loss in his last bout in ONE Championship, costing him the ONE Bantamweight World Championship. For many, it would be a devastating loss. However, for Fernandes, it is not something to regret. He quickly picked up the pieces and went back to work.

“The Flash” will return to the Circle on Friday, November 18, against #5-ranked contender Stephen Loman at ONE on Prime Video 4: Abbasov vs. Lee. Although the former bantamweight king feels he was just one more round from retaining his gold, he is focusing on taking on the rising Filipino star. Fernandes was nothing but complimentary of the skills Loman will bring into the Circle with him.

“Stephen Loman is a great athlete. He’s in great physical shape. He’s a fighter who hits and moves all the time. He kicks a lot, throws overhands with his left hand, and moves a lot in the cage. He’s an excellent fighter. On the day of the fight, I will be ready to face him. He’s a good athlete and he can even beat me, but I’ll tell you something: he won’t win easily. It will be a war,” said Fernandes.

When breaking down Loman’s game, Fernandes picked up on the unique style of Team Lakay. The Filipino gym has delivered numerous stars and several world-champion athletes. Loman could be the next if he can get past Fernandes. While the Brazilian sees a clear advantage in the grappling department, he will be ready to challenge him no matter where the action goes.

“He has good wrestling. I’ve never seen anyone putting him down. I’ve never seen anyone doing jiu-jitsu with him, and I haven’t seen him fighting with his back on the ground. He doesn’t like to have his back on the ground. He does everything he can to stay on his feet when the opponent tries to take him down. But he has a very good left hand and a good kick, as well as a lot of movement. Those are his strengths. Weaknesses, I’ve noticed a few, but I’m focusing on his strengths,” said “The Flash.”

The meeting between the two bantamweight contenders could be considered a possible title eliminator. Fernandes is a long-time champion of the division, having only recently suffered the loss of his title, and Loman is moving quickly up the ranks to state his case to have the next shot. But with John Lineker and Fabricio Andrade still at the top of the heap, “The Flash” is being patient.

As one of the best pound-for-pound athletes in recent years, Fernandes is still not ready to take a backseat in the division. The multiple-time world champion has kept his body in excellent physical condition. Even though he is not pounding the table for another shot at the gold, Fernandes is adamant that his time at the top of the mountain is far from over.

“For him, it might be a playoff, but not for me. I’ve defended the belt several times, and I’m happy to be able to fight an athlete like him. I’ve faced other Team Lakay athletes, but I don’t see it as an eliminator. I see this fight as a challenge, and I’m ready for that challenge. I will enter with great seriousness, strength, and determination,” said Fernandes.

“I am 42 years old, but with a body of 30 and a very healthy mind. I take good care of my body and my mind. As long as my body and mind are fine, I will keep fighting. I don’t see this as my last fight. Randy Couture fought until he was 48. Anderson Silva is 47 years old and still fighting, so I think I still have a lot of wood to burn. The Bibiano Era will not stop here.”

His era will get a chance to prove it’s still ongoing on November 18. If the title bout comes following a win over Loman, the Brazilian star will not turn down the opportunity. He will be waiting with open arms to reclaim the gold that called his arms home for so many years.

ONE on Prime Video 4: Abbasov vs. Lee airs live and free for all Amazon Prime subscribers in the U.S. and Canada on Friday, November 18, at 8 p.m. ET/5 a.m. PT. Tickets for the event are on sale now at Ticketmaster.