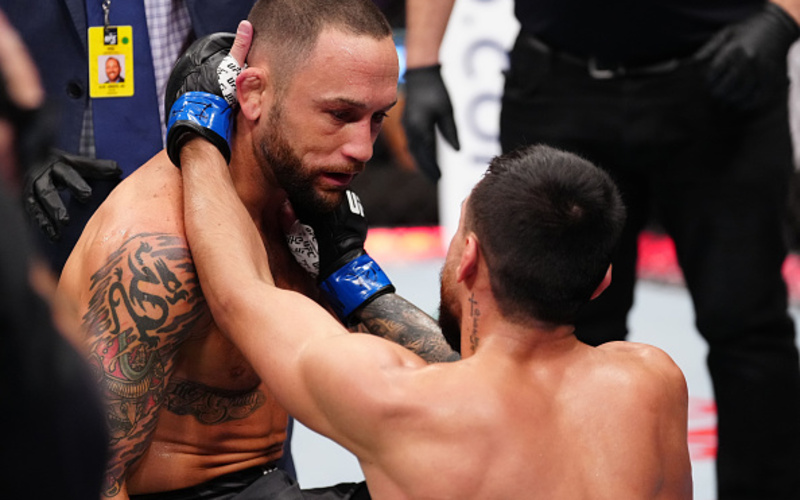 After turning himself into one of the sport’s all-time greats, Frankie Edgar ends his career looking up at the ceiling of Madison Square Garden.

Edgar knew this was his retirement fight coming into UFC 281. He was in a spot where he wasn’t going to win a title ever again, or compete for one, and his body was failing him. He had by all reports a great training camp and was confident heading into his bout with Chris Gutierrez. Many fans and media wanted a fight between Edgar and Dominick Cruz but instead, as the UFC usually does, they used Edgar to prop up an up-and-comer.

Chris Gutierrez brutally knocks out Frankie Edgar. Edgar stiff on the ground momentarily. Ugh. His kids are cageside. Huge moment for Gutierez, he did what he had to do, but I wish this wasn't the way they booked Edgar on the way out. He deserved to fight someone his age. Damn.

While that is totally in their respect to do, it doesn’t make it any less dirty. On the same day boxing legend Ricky Hatton was able to come back and go out on his terms, Edgar did not get the same pleasure.

Not the way he wanted to end it, but tonight @FrankieEdgar closes the book on a legendary career inside the Octagon 🙌 #UFC281 pic.twitter.com/XDlkQ68mvW

Now for the positive.

Longterm, this will be a very impressive name in what is a young and promising career already for Gutierrez. He perfectly timed a knee to the chin of Edgar as he dropped down after a faint by the soon-to-be-ranked bantamweight. The knockout on Edgar is his second straight win by KO/TKO and he is now in the driver’s seat to make an appearance in the rankings when they update this week.

Gutierrez is still a long-term play for the UFC but he has a style and a mouth that can write checks and have them cash at the same time. This knockout out of Edgar is going to sting for fans, you knew that if you watched the ending and heard the arena go quiet, but long term he will be in great shape.

Lots of fun matchups in what is easily the sport’s best division, who he matches up with next should be a guaranteed must-watch just as this bout was.