Poirier Submits Chandler in Fight of the Year Candidate 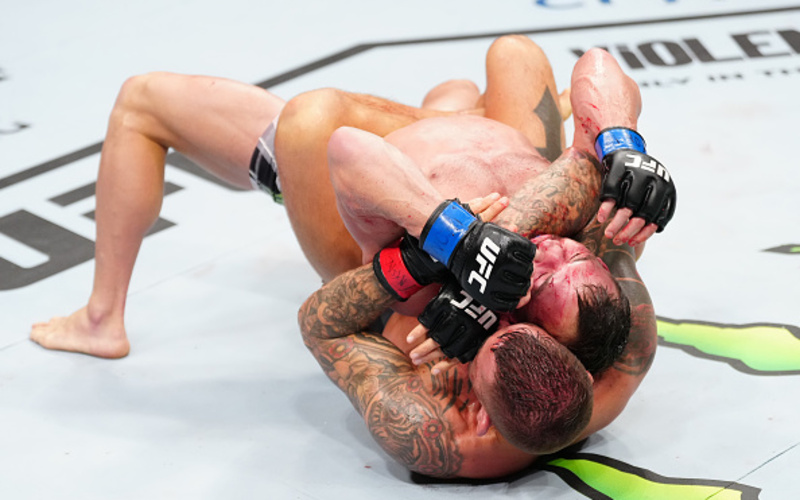 When the fight was announced everyone thought that this was going to steal the show and did it ever at UFC 281. Michael Chandler and Dustin Poirier took a piece of one another with them in a three-round war that saw both men have their moments before it came to a finish.

Poirier brought the spice to this fight just as much as Chandler did. In round one, the Missouri wrestling product and former Bellator champion was piecing up Poirier against the fence. He was rocking Poirier time and again but then about halfway through the round Chandler changed levels and scored a takedown.

While the takedown scored points with the judges it was all that The Diamond needed to catch his breath and come back with a vengeance.

Poirier would end the last minute of round one giving Chandler way more than he received at the start of the fight and potentially stealing the round on the scorecards. Chandler went back to his corner a bloody mess and Poirier sat on his stool again catching his breath.

Round two would be a snoozer compared to round one but we saw Chandler really use his wrestling for the first time in his UFC career. He kept Poirier grounded, landed ground strikes, and controlled his wrists not allowing him to get up.

Round three is where the fireworks would return, however.

Chandler would rock Poirier again before shooting for a takedown when Poirier swooped in with strikes of his own. Chandler did his best Matt Hughes impersonation by lifting Poirier up before attempting a slam that somehow resulted in Chandler giving up his back.

After a brief pause by both men, Poirier demonstrated why he indeed has a legit Jiu-Jitsu black belt despite Islam Makhachev claiming otherwise. Dustin Poirier would sink in a rear-naked choke and force Michael Chandler to tap thus ending the potential fight of the year in the sport of mixed martial arts.

"Hey, Mike! I was scared to fight you. It was coming from a healthy spot. Without fear, there is no bravery."@DustinPoirier shared a moment with @MikeChandlerMMA prior to his interview with Joe Rogan 💎#UFC281 pic.twitter.com/wBV8kmkxhm

Post-fight everyone was left looking for their grandparent’s oxygen tank as they needed to catch their own breath after watching these two lightweight legends give the fans another classic. Dustin Poirier now is in a unique spot in the division as much as Michael Chandler is, no matter who they face next it will be another must-watch.