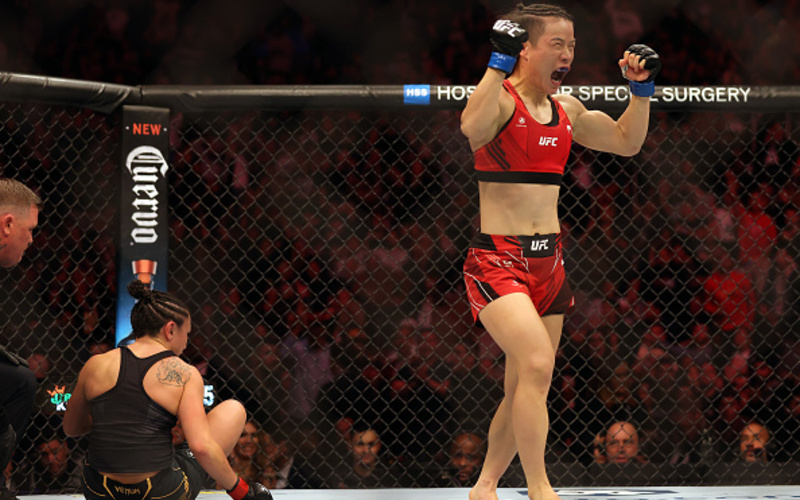 UFC 281 set the record for first-round knockouts but Weili Zhang and Carla Esparza wanted to mix things up.

Heading into their bout for the women’s flyweight championship, Zhang was a heavy betting favorite over the defending champion Esparza. The Cookie Monster was coming off a less than thrilling win over Rose Namajunas but it was still a win over someone who had beaten Zhang twice in a row. Fans and media couldn’t find a way for Esparza to have a leg up on Zhang and it turns out they were right to think that way.

The first round was a back-and-forth exchange of grappling scrambles between the two champions with Zhang having more effective transitions and submission attempts. It was clear that despite her wrestling background, Esparza was facing an uphill battle. She wasn’t as technically sound in the grappling and she wasn’t strong enough to handle her transitions.

Both those issues came to a head in round two for the defending champion as Weili Zhang was able to get her in a crucifix twice with the second time being the one to seal things. She would get Esparza in a modified crucifix position and would be able to start a rear-naked choke attempt with one arm before locking it in tight with a second.

Please book Zhang Weili vs. Amanda Lemos so we can finally see somebody different fight for the title?

Absolutely nothing against Rose Namajunas but she should at least have to get a win before another title shot.#UFC281

It was a masterclass in grappling from the Chinese champion as she impressively scrambled her way to the mountaintop once again in the UFC. She has to be seen as the most complete women’s fighter on the UFC roster and now has the entire weight class in an interesting position. Does Rose Namajunas get a third crack at the belt with Zhang seeking revenge? Or do we see Amanda Lemos bring a fresh face to the title picture as the UFC gears up for a return to Brazil in early 2023?

Only time will tell, what we know is we are seeing one of the best women’s fighters ever in Weili Zhang and the time is now to start realizing that.