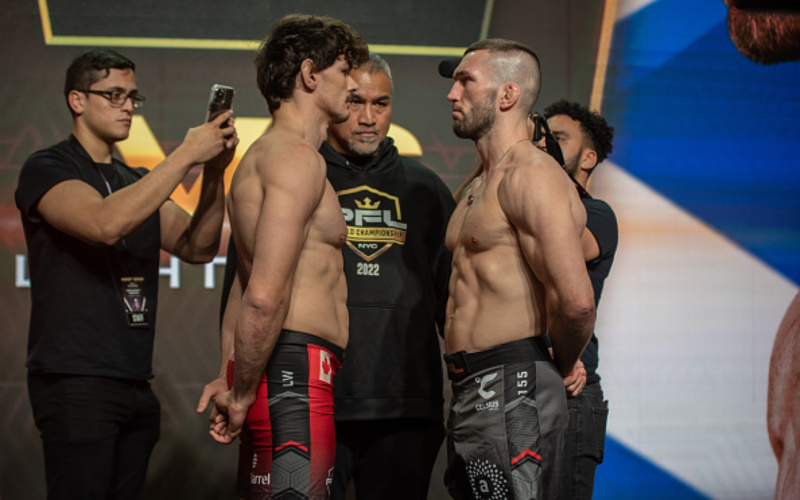 This weekend’s PFL 10 2022 card will see twelve fighters compete in playoff finals across six divisions. Half of these fighters will become world champions and walk away with the biggest cash prize in combat sports. The last men standing at 155 pounds are Stevie Ray and Olivier Aubin-Mercier.

Just over a year removed from coming out of retirement, Stevie Ray will compete for the PFL Lightweight World Championship, and the $1 million prize that comes with it. Ray had a moderately successful four-and-a-half-year run in the UFC but quit the sport in 2020 citing a recurring knee injury. He would later recant this reason and instead blame the UFC for cutting him after he was forced to turn down a fight because of visa issues.

Ray spent a year on the sidelines before signing for PFL in late 2021. He dropped a unanimous decision to Alexander Martinez in his debut on PFL 1 2022 but put together back-to-back victories over former UFC champion Anthony Pettis—including a miraculous second round submission via twister at PFL 5. And now with just one more fight separating him from the glory, he must defeat another man who is no stranger to facing high-level, UFC-caliber competition.

What a sub and what a moment for Stevie Ray, who has had his fair share of crappy luck. Incredible finish v Pettis. pic.twitter.com/s9FHzALGOR

Olivier Aubin-Mercier is no stranger to the tournament format in MMA. He broke into the big leagues when he made it to the final of “The Ultimate Fighter Nations: Canada vs. Australia” back in 2014. Despite falling to a split decision at the last hurdle, he was signed by the UFC. He amassed an impressive 7-1 record over the next four years, including five finishes—with one of those being a rear-naked choke of Drew Dober.

Aubin-Mercier ran into some problems in mid-2018 when he faced some incredibly tough competition in Alexander Hernandez, Gilbert Burns, and Arman Tsarukyan—dropping three straight decision losses through these fights. He was cut by the promotion shortly thereafter and signed by PFL for their since-cancelled 2020 season. He made two appearances in the PFL last year and has turned the two victories he collected there into a five-fight win streak in the 2022 season.

Not many people have stopped Evan Dunham, and he does it inside a minute! 👀 pic.twitter.com/Sc1pNiqJTJ

Both fighters have found a new lease of life in the PFL. And tonight they will have the chance to earn more money in one fight than they have across the rest of their careers. This event guarantees every fighter will be giving all they have in the cage. If you are unfamiliar with PFL, this is the perfect time to start watching. You can see this bout and more like it on PPV for the low, low price of $50.