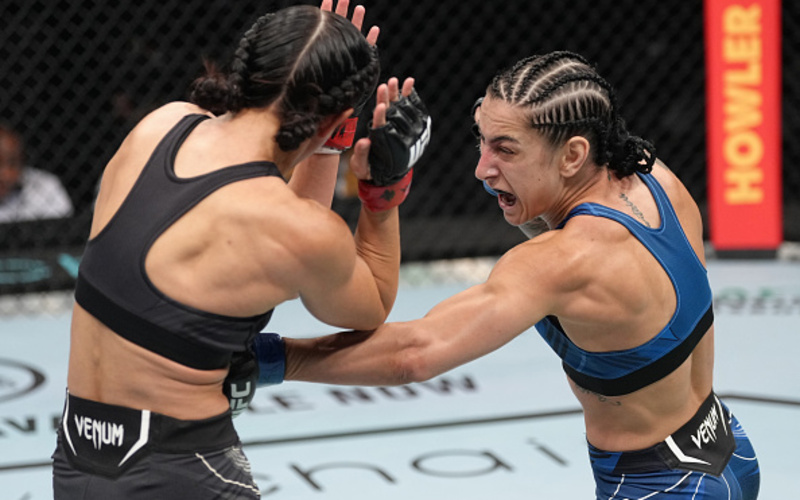 Two former Invicta FC strawweight champions clash at UFC on ESPN 42 when Angela Hill looks to put an end to Emily Ducote‘s four-fight winning run. With just a single UFC appearance under her belt, Ducote will look to knock off (or knock out) another UFC mainstay after she defeated eight-year veteran, Jessica Penne in her debut back in July. After her first UFC bout, she was ranked which surprised many, however, it’s hard to say it wasn’t deserved.

Hill, on the other hand, will be competing in her 27th professional fight and her 22nd UFC bout. Sporting a record of 14-12, Hill hasn’t had it all her own way, however, as we saw last time out against Lupita Godinez, she’s not afraid of a hot prospect.

Journey to UFC on ESPN 42

Ducote began her career in 2015 and since then has progressed to boast a record of 12-6. Interestingly, she’s only been finished once and that was at the hands of Ilima-Lei Macfarlane for the inaugural Bellator flyweight title back in 2017. Staring down the barrel of a three-fight losing skid under the Bellator banner, Ducote looked to be out of ideas and looked to be ‘just another fighter’.

Her run in Invicta FC, however, revitalised her career. Following a finish in her debut, she competed for the title.

Despite losing to Kanako Murata, she then went on a three-fight winning run and again competed for the title which had been vacated by Murata. Ducote’s finish victory over Danielle Taylor to capture the belt was something to behold.

Ducote was matched with UFC mainstay, Jessica Penne in her debut. The two appeared well-matched, however, Ducote dominated the fight for the full 15 minutes.

What paid dividends for Ducote was the calf kick. She brutalised the leg of Penne, landing a massive 52 of 58 leg kicks across 15 minutes, setting a new strawweight record for leg kicks landed in a three-round fight. She showed phenomenal takedown defence, stuffing all eight of Penne’s takedown attempts and kept the fight where she wanted it.

Ducote will face a far more challenging test in Hill. Her output is far higher than that of Penne, she’s more effective in the clinch and is also a lot faster than Ducote’s first UFC foe.

Hill lands an average of 5.36 strikes per minute at an accuracy of 48%. This would suggest that she’s willing to throw 10 strikes to land five. Interestingly, she absorbs almost five strikes per minute, highlighting that she enjoys a war. She lands almost as many strikes as she absorbs, she isn’t a sniper and she doesn’t mind a good scrap.

Speaking to MyMMANews, Ducote noted how high Hill’s output is, how she enjoys throwing volume and how she expects a fast-paced fight. She seems to know what to expect out of Hill, which is positive for fans of Ducote’s.

When Hill faced Torres, Tiny Tornado was able to land 23 of 29 leg kicks across 15 minutes. This would suggest that, against a quick, stand-up fighter, Hill may struggle to defend the leg kick. If Ducote decides to follow the same strategy that got her her first UFC victory, there’s a good chance that it could work again. Slam the leg, hamper the movement and cruise to victory.