How can Jan Blachowicz get his belt back at UFC 282? Video Anaylsis 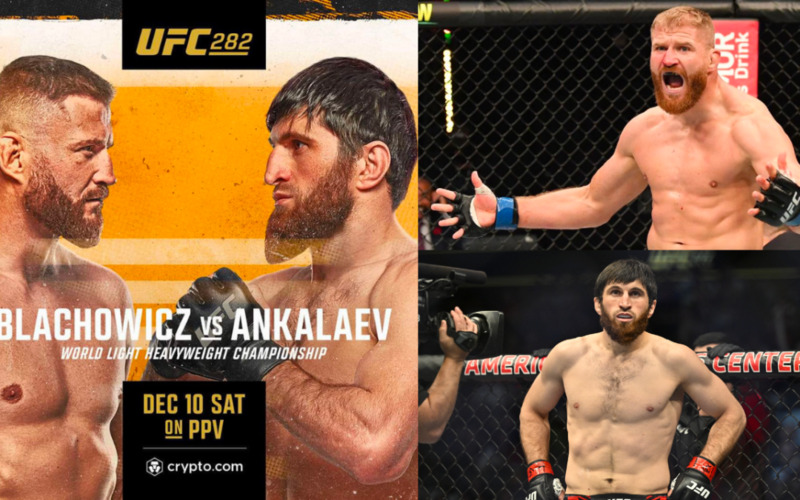 UFC 282 has seen quite the shake-up in recent weeks. After originally being scheduled as a three-round co-main event, Jan Blachowicz and Magomed Ankalaev will now clash in a five-round main event. Not only this, but the light heavyweight title will also be on the line.

Here’s everything you need to know about the UFC 282 situation:

We take a look at how Blachowicz, a man who will enter Las Vegas as the underdog can upset those odds and come away a two-time light heavyweight champion.

As former champion and now top analyst, Michael Bisping told his Youtube channel, he favors Blachowicz over Ankalaev if he can keep the fight standing. Bisping stated:

“I feel like Jan Blachowicz, if he can stop the takedown, the fight is going to be in his favor – but it’s going to be hard” and then later went on to say, “It all comes down to whether or not Blachowicz can keep it on the feet. If he can, I can see a knockout victory for Jan Blachowicz – or Magomed is going to take him down, try and outwrestle him.”

Ankalaev averages 0.94 takedowns per 15-minutes at an average of just 33%, however, the threat of the takedown is always there, which sets up his hands. This is something we’ll discuss in more detail later. First, let’s take a look at Ankalaev’s ‘go-to’ takedowns and how Blachowicz could prevent him from landing them.

Against Nikita Krylov, the Russian landed three of nine takedowns. His first was a reactionary takedown, countering Krylov’s spinning attack and taking the fight to the floor. The second and third, however, he was able to get the fight to the floor using an inside reap whilst having double under-hooks.

This is slightly worrying for fans of Blachowicz. He struggled against Texiera when the Brazillian reacted to Blachowicz’s shots and dived for the legs. Blachowicz appeared to be slow to react to the offence of Texiera, leading to the takedown being landed. He was largely controlled in the clinch when Texiera had his first takedown attempt quashed, again, somewhere where Ankalaev could look to stall and dominate. Similarly, when faced  Alexander Gustaffson, the Swede easily took Blachowicz down from the clinch with an outside trip.

If the fight hits the floor, this is where Ankalaev can really take over and this is why Blachowicz needs to do everything in his power to keep his back off the canvas. Despite having a takedown defence of 66%, it’s when he does get taken down when the problem presents itself. There is a huge hole in the Polish star’s game and it’s his defence off his back and his ability to get back to his feet.

In his last two fights, he’s been controlled for a total of 9:50 of a possible 19:13. He was taken down twice by Texiera and once by Aleksandar Rakic. Looking further back in his career, despite being a BJJ black-belt, Blachowicz was controlled byGustaffson on the ground, 10:43 of 15 full minutes were controlled by The Mauler, someone who isn’t traditionally a strong grappler.

If he is taken down by Ankalaev, don’t be surprised to see the Russian look to hold the former champion down for as long as he wants. He’s really effective at not giving his opponents space when he’s on top. Utilising his shoulder and chest pressure eradicates any ability of his opponents to get space and get back to their feet. Against Dalcha Lungiambula, Ankalaev was able to get the fight to the floor and from half guard maintained smothering shoulder pressure. It allowed him to land brutal ground and pound, which forced Lungiambula to just hold on and avoid damage. He was able to almost get him in a crucifix position with his strong head pressure.

Blachowicz has to be frantic in his pursuit of getting back to his feet. He all too readily gives up rounds whilst on his back and could see this one slipping away from him if he doesn’t address this flaw.

Stop the takedown and make his night more straight forwards… Easy, isn’t it?

Catch the Kicks and Counter off them

Despite coming from Dagestan, Ankalaev is a phenomenal striker. He averages 3.64 significant strikes per minute, with an accuracy of 54%. He’s not only slick in the boxing range, but he is a competent kickboxer too, often mixing it up between low, mid and high kicks.

Against Anthony Smith last time out, the American was able to catch the kicks of Ankalaev multiple times, pulling him off balance and forcing him into a hard reset.

Jan Blachowicz is one of the best checkers of leg kicks in the game today. As a result of this, don’t be surprised to see Ankalaev drift away from throwing leg kicks and look to throw more body and high kicks. This will open up more opportunities for Blachowicz to catch the kicks of Ankalaev and counter off them.

Luckily for Blachowicz, he’s also effective and counters quickly when in kicking range. He’s extremely effective at blocking high kicks and body kicks and he needs to now look to counter off those catches and catch Ankalaev out.

We can see how effectively he gets both of his arms in position to block the kick of Rakic and parry the leg back to the floor. He gets his forearms into play here to not only block the kick but also, it can’t be comfortable for Rakic’s shin to land on Blachowicz’s forearms and elbows.

Here is another example of how he gets his guard up higher this time in order to block the head kick offering of Israel Adesanya. Not only does he get both of his hands up to block the kick and guard his head, but he also manages to get his lead leg into play in order to check a potential leg kick if Adesanya chose to go low with the strike. This did knock Blachowicz off balance, however, leading to him falling back into the cage, something that we’ll look at him having to avoid later on. 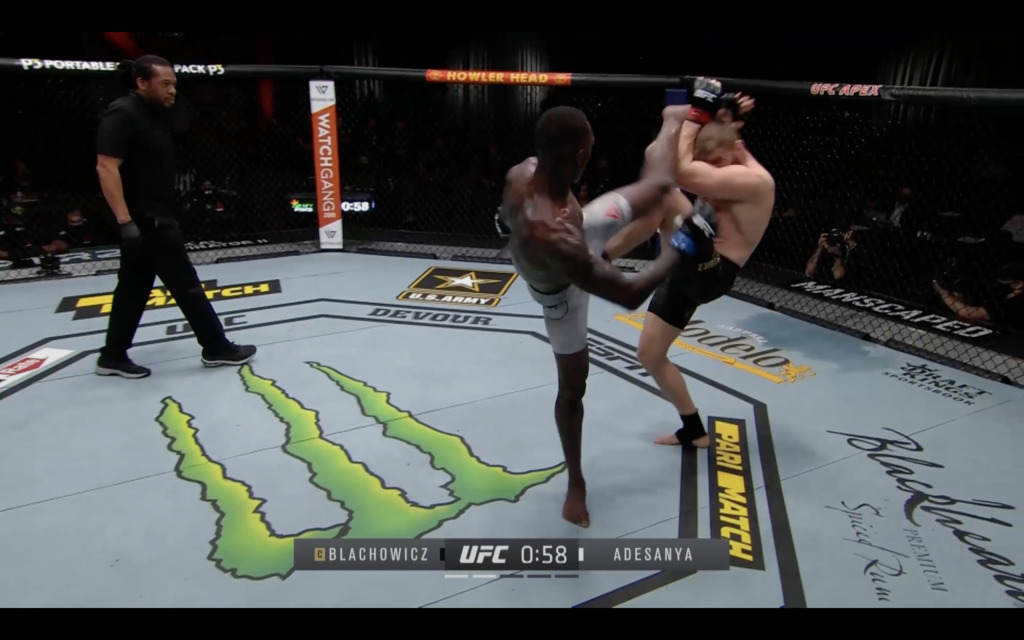 Ankalaev is a slick striker, he doesn’t ever take a lot of damage. We have never seen him in an all-out war in the UFC and he’s never appeared to be in danger of being finished on the feet. Therefore, Blachowicz needs to do something different, to show the Russian something different and catch him out.

Looking to counter will be beneficial for Blachowicz as in recent times, Ankalaev hasn’t faced a counter striker who is the same size as him. We know Blachowicz can counterstrike well and it could play massively in his favour this weekend.

Keep his back off the fence

Arguably the most important aspect for the former champion, Jan Blachowicz to consider when stepping into the cage this weekend is to keep his back off the fence. He can’t allow Magomed Ankalev to back him up, because not only does it give his opponent more options to attack, but it also limits Blachowicz’s opportunities to counter and to implement his own gameplan.

Some of Ankalaev’s best work, both in the wrestling realm and on the feet takes place when he pushes his opponents back towards the fence. Ankalaev is one of the best fighters in the UFC at backing his opponents up. When he faced Thiago Santos, we saw just this. In the third round, Ankalaev kept Santos on the ‘outer octagon’ (indicated with the white arrow) for almost four whole minutes, dictating where the fight took place and when the exchanges started. 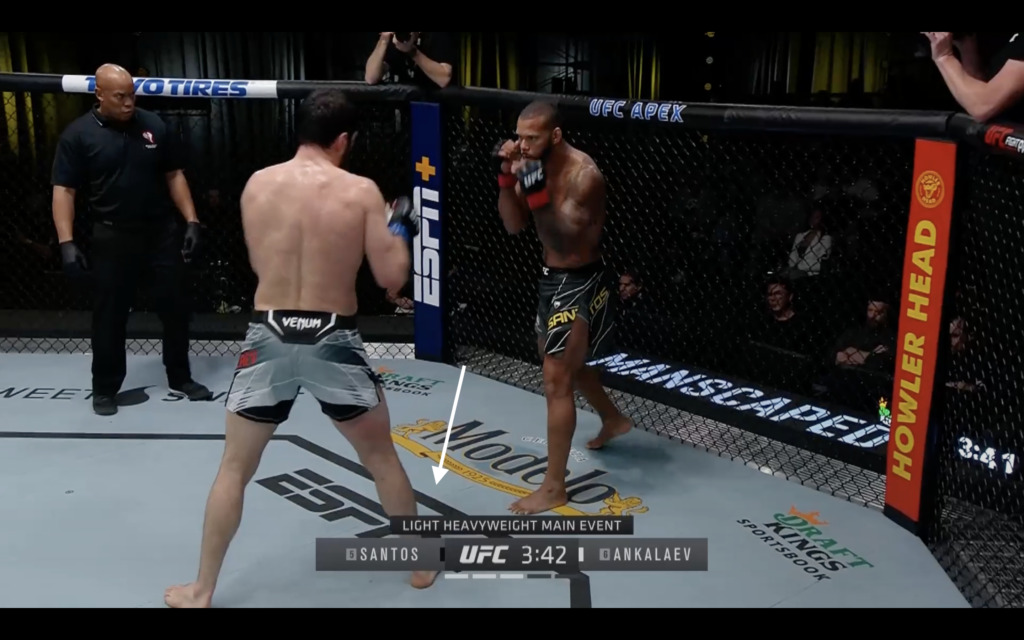 Unfortunately for Blachowicz, he has a tendency to allow himself to be backed up more often than not. In his title fight with Teixeira, he all too easily gave up territory after attacking. He gladly took multiple steps backwards in order to reset, rather than circle out into space.

This, in turn, lead to the Brazillian being able to constantly threaten the takedown and keep Blachowicz guessing.

Similarly, when Blachowicz faced Jimi Manuwa in London, he jabbed on the backfoot but again and was clearly aware of the threat that Poster Boy posed. He backed up, rather than meeting him in the mid-range and try to fight power with power. As we can see in the example below, as soon as Blachowicz’s back hit the fence, he was urgent in making sure that he didn’t stay there, quickly circling out to his right. With that being said, he still was stood in the ‘outer octagon’, a position that he can’t afford to be in against Ankalaev.

He allowed himself to be backed up against Adesanya too, however, this time looked to explode with a flying knee in order to back his opponent up and get himself off the fence line. This is a tactic that he could use, looking to attack off the fence, however, it would likely serve him better to totally avoid the situation and keep his back off the fence entirely.

It’s going to be tough for Blachowicz, something that the MMASucka podcast crew discussed at length on this week’s podcast, however, if he can get past Ankalaev, it’s a huge feather in his cap.