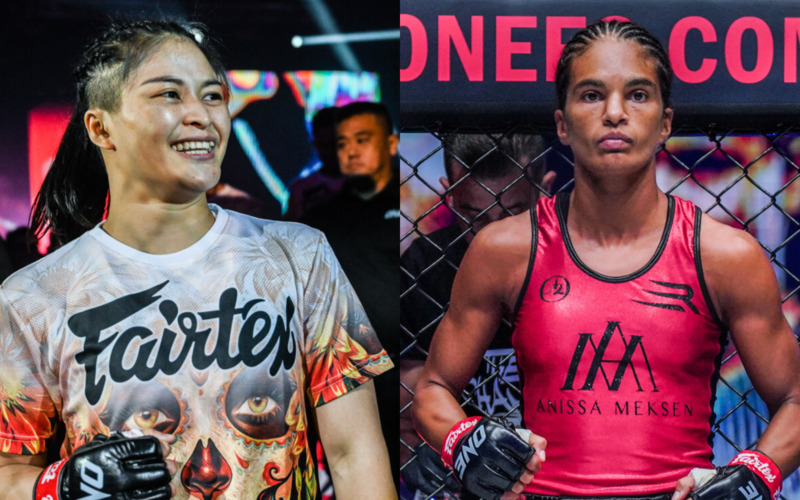 Booked for ONE Fight Night 6 on Prime Video, Stamp Fairtex and ‘C18’ Anissa Meksen will have a mixed rules super fight on January 13.

Anissa Meksen is a well-decorated and respected striker. The French-Algerian athlete has collected world titles in organizations such as GLORY Kickboxing, Enfusion, Venum Muay Thai, ISKA, Wako, Savate, French National Boxing, and others.

Stamp Fairtex is a combat sports superstar. She has earned ONE Championship world titles in both Kickboxing and Muay Thai. However, Meksen is not impressed with her record or accolades. Stamp recently responded to her comments in an interview with Tim Wheaton of Calf Kick Sports.

To put it mildly, Stamp Fairtex does not care about the trash talk from Anissa Meksen. The 25-year-old Thai athlete has heard it all before. While speaking in an interview, Stamp explained:

“I don’t really feel anything in particular. Actually, everyone does this before testing me. So I’ll just go, and we will have a fight, and we will see.”

In the ONE Fight Night 6 mixed rules super fight, Stamp and Anissa have agreed to a unique ruleset. Each round in their match will alternate Muay Thai and MMA rules. Round one will begin with Muay Thai, round two MMA, and so on. The Thai-born athlete explained that she will be aiming for a submission win finish in round two. Stamp said:

“For Muay Thai, I have been working on technique. And for MMA I have been focusing on takedowns … I am absolutely winning this and I will try for submission in the second round.”

While speaking in the interview, Stamp also discussed her long-term outlook in combat sports. She said:

“In five years I think I’d still be around. Hopefully, I’ll be having three of my titles, and also I’ll be defending the titles. And also in 10 years, I would be 35 so two ways – either I’ll be a trainer in another country, or I’ll just do some gardening and not really be into martial arts.”

Stamp Fairtex is also proud of her work in empowering women. Recently, she toured the USA giving Muay Thai seminars to women. Recalling this, she said:

“Working out is not intimidating, it’s not something embarrassing. And it’s good for you that you learn martial arts to basically protect yourself if something happens to you and your loved ones. If you wanna do something, do it.”

Watch the full interview below: