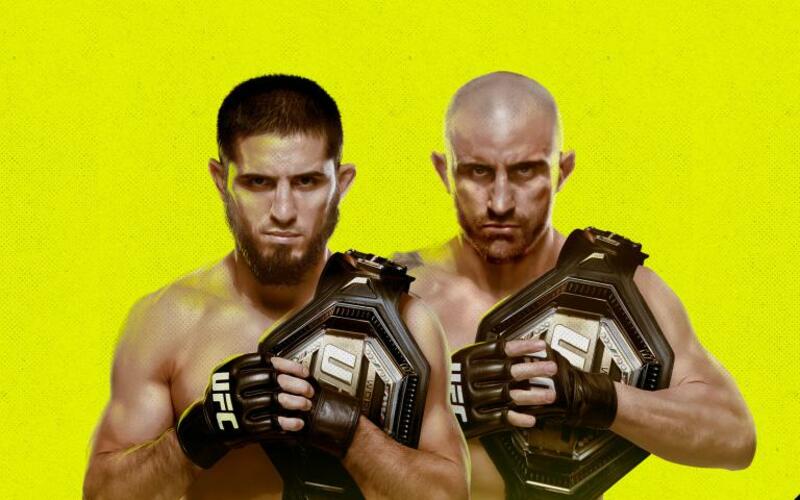 UFC 284 is set to kick off in Perth, Australia on February 11th. The card features UFC featherweight champion Alexander Volkanovski moving up in weight class to face lightweight champion Islam Makhachev. The winner gets the lightweight title, and for Volkanovski, fighting in his home country, it would mean holding two titles at once. It will mark nearly two years since the last time UFC featured two full title holders in the same bout.

Makhachev has a sterling 23-1 record in his career, having won four of his fights by knockout, 11 by submission, and eight by decision. He took the vacant lightweight title last October with a win over Charles Oliveira via knockout, so this is his first title defense. Volkanovski for his part has a nearly identical 25-1 record via 12 knockouts, three submissions and ten decisions. He took the featherweight title at UFC 245 in December 2018, defeating Max Holloway via unanimous decision and has since defended his title four times.

The undercard has some interesting fights as well, especially the Yair Rodriguez vs Josh Emmett for the interim featherweight title. The winner will eventually face Volkanovski, who ideally wants to simultaneously hold both crowns.

Betting markets are up already on Makhachev vs Volkanovski. New customers should take advantage of sportsbook promo codes for the best welcome bonuses. Typically the sportsbooks offer first bet free bet insurance. Just sign up, deposit funds, and place a wager. If the bet hits, collect your winnings. If it loses, the book refunds the amount of the loss in risk free bets up to a set maximum, usually around $1000.

Here are the most popular ways to bet on Makhachev vs Volkanovski, and other UFC fights.

This is just a wager on who will win the fight. UFC bouts can end in draws, but it is very rare, so UFC lines typically default to two-way bets. If it does draw, the bet voids. FanDuel has the following odds up for Makhachev vs Volkanovski.

It is the combat sports version of an Over/Under. How long will the fight go? Most UFC bouts schedule three rounds of five minutes each, but Makhachev vs Volkanovski is set to go five rounds. FanDuel has these markets up for “What Round Will Fight End”

If the fight ends between rounds, it is deemed to have ended in the prior round. None of these bets will win if the fight goes the distance. As the fight gets closer, books will also lift half-round props, which literally puts the over/under at the 2:30 mark of the round in question.

As above, but more like a prop as the wager includes both the round the fight ends and who won the fight. FanDuel batches rounds and the winner as follows.

As in total rounds bets, if the fight ends between rounds it is deemed to have ended in the last completed rounds. As this fight gets closer, the books will separate these out and post markets on each individual fighter and round combo.

There are lots of variations on this type of bet. Players can wager on how the fight ended, combined with who won the bout. These markets are up in Makhachev vs Volkanovski

FanDuel also has odds up on Method detached from the fighters

Really all the above bets other than money lines could classify as props. All the books will offer variations of the above, plus more. Neither the exact props nor the price will be identical from book to book. FanDuel has these “Time Props” listed already, including “Will the Fight Go the Distance”. They have “Yes” at +160 and “No” at -220. There is also a “Fight to Start Round X” market for each round. Plus there is this grouped “When Will the Fight End” listing

They also have more specific Method and Round combos, such as” Makhachev KO/TKO & Round 1” at +1400 and “Volkanovski Submission & Round 2” at +6500 to cite two examples.

It sets up as an extremely interesting fight headlining an exciting UFC 284 main card. As it gets closer, the sportsbooks will post odds on all of the above for most of the bouts. Bettors will have many ways to wager on the UFC fights.