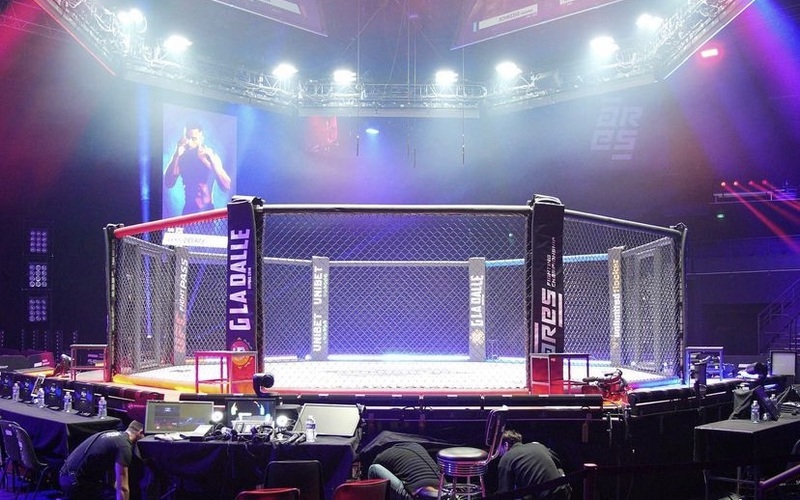 Ares Fighting Championship, France’s leading MMA promotion, will return this afternoon for the first time in 2023 with an exciting card for Ares FC 11. The show will be headlined by a vacant middleweight championship fight between welterweight champion Abdoul Abdouraguimov and Rafal Haratyk.

A women’s flyweight championship fight between Ewelina Woźniak and Ivana Petrović was originally tapped for co-main event status, but has been rescheduled for Ares FC 14 in April.

Abdouraguimov, a Russian-born fighter fighting out of France is perhaps the latest and greatest prospect to come out of Fernand Lopez‘ MMA Factory gym. “The Lazy King” is among the most dominant fighters not signed to a major promotion and has gotten the job done with a killer instinct that has really come into its own over the last three years. Ever since losing his perfect record with a knockout at the hands of Jarrah Hussein Al-Silawi in Brave CF (an opponent he had previously beaten), the former BRAVE CF champion has responded with five first-round finishes. He captured the promotional welterweight championship with a win over UFC veteran Godofredo Pepey at Ares FC 3 and has not looked back. He will now look to add a second championship to his standing collection, and in the process pave the way to a UFC debut later this year.

To do this, he will need to get through Haratyk, an impressive Polish fighter who compiled a 5-1 record over a three-year stint in ACA. He is perhaps the more natural middleweight of the two, though he dabbled at 170 pounds in his ACA debut, a fight in which he won after his opponent succumbed to an injury at the end of the first round. He has fought as heavy as 198 pounds in Extreme Fighting Championship, a promotion in which he once fought ranked UFC middleweight Dricus Du Plessis. As a result, the well-traveled Haratyk has evolved into one of the most proven commodities on the European regional scene. If he can derail the Abdouraguimov hype train, he may find himself on the radar of a major promotion before long.

The Co-Main Event: Oudelha vs. Ayoub

A fun lightweight contest between French fighters Ghiles Oudelha and Amin Ayoub will serve as the co-main event for Ares FC 11. Oudelha has alternated wins and losses since 2019, but picked up a win in his Ares FC debut against Teddy Violet in September 2022. He won the fight by way of a unanimous decision. The Frenchman once put together an eight-fight winning streak between 2016 and 2019, and a win over Ayoub will give him back-to-back wins for the first time since.

His opponent, Ayoub, has fought beyond the French regional scene dating back to 2019. He has fought for global promotions such as Brave CF and UAE Warriors, winning the lightweight championship for both companies. However, he has fallen on hard times as of late, losing his BRAVE CF championship to Ahmed Amir before falling to Damien Lapilus in his Ares FC debut due to doctor stoppage in the second round. He has since rematched Lapilus, but could muster only a majority draw against the MMA Factory product. He now turns his attention to Oudelha in desperate need of a win.

The remainder of Friday’s main card will feature some of France’s finest fighters not already signed to a major promotion. Unbeaten prospects will collide when France’s Baysangur Chamsoudinov welcomes Brazil’s Alexander Mikael to the promotion. Another unbeaten prospect, Paweł Biernat of Poland, will take on 12-4 Faycal Hucin in what should be the toughest test of his career in the heavyweight division.

Additionally, a pair of women’s fights will occupy spots on the main card. England’s Levi Steedman is set for action against France’s Alexandra Tekenah at 125 pounds. Meanwhile, Assia Miri, a 1-0 MMA Factory product, will take on 4-0 Fabiola Pidroni out of Italy in a fight that should speak volumes about where both fighters are at in their careers. Also confirmed for the main card is a welterweight bout between England’s Ammari Diedrick and Morocco’s Karim Ghajji.

Abdoul Abdouraguimov def. Rafal Haratyk via Submission (kneebar) at 4:35 of Round 5 — For the vacant Ares FC Middleweight Championship

Fayçal Hucin def. Paweł Biernat via Disqualification (Illegal Blow) at 2:15 of Round 1

Alexandra Tekenah def. Levi Steedman via TKO (strikes) at 2:49 of Round 2

Fabiola Pidroni def. Assia Miri via TKO (punches) at 2:24 of Round 1

Mickael Groguhe def. Freddy Kamayo via TKO (strikes) at 1:52 of Round 1

Kenzo Soares Silva def. Elvis Thcapda via Knockout (punches) at 4:48 of Round 2