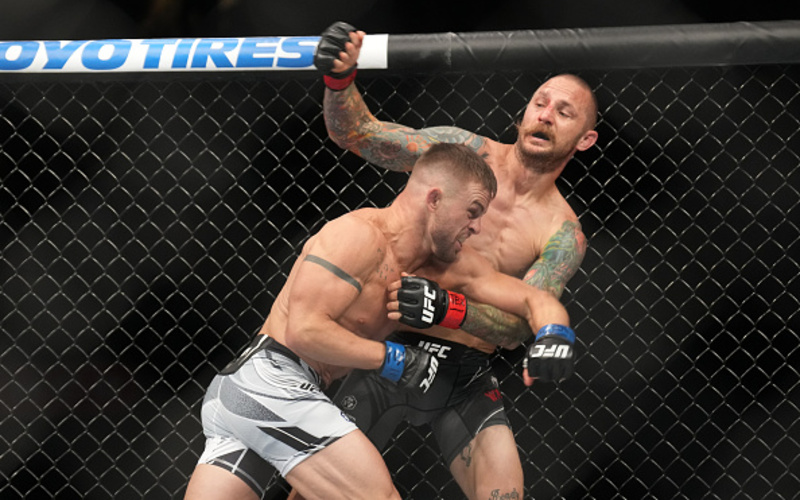 UFC 283 is set to go down from the Jeunesse Arena in Rio de Janeiro, Brazil, on Saturday. The card features two title fights: Glover Teixeira vs. Jamahal Hill for the vacant light heavyweight championship, and Deiveson Figueiredo vs. Brandon Moreno IV for the flyweight belt.

Many fans will be curious to see who walks out of Rio de Janeiro with UFC gold around their waist, while the main card is rounded out by other fights rife with title implications. Gilbert Burns and Neil Magny are set to duel at welterweight, Jessica Andrade and Lauren Murphy will clash at flyweight, and Paul Craig and Johnny Walker will battle it out at light heavyweight.

Fans should not overlook the stacked preliminary card, however. UFC 283 features top prospects, fighters making their UFC debuts, and contenders looking to ascend their divisions.

While the whole card is must-see TV, here are five fights on the prelims fans will want to keep an eye on.

Stamann is looking to get back into the deep bantamweight division’s rankings, and a win over Lacerda should get him that shot. Lacerda is a Brazilian jiu-jitsu specialist set to make his UFC debut, and the vast majority of his wins have come via submission.

Stamann is a wrestle-kickboxer who will likely look to keep the fight standing. This fight should answer questions on whether Stamann can climb back into the bantamweight rankings in a quick manner or if the UFC has a stud in Lacerda.

Stamann snapped a three-fight skid – the longest of his career – with a dominant TKO win over Eddie Wineland. “The Spartan” has fought a who’s who in the bantamweight division, having competitive bouts with champion Aljamain Sterling and top contender Merab Dvalishvili. He drew with Song Yadong in a fight many thought Stamann won, and he holds victories over Bryan Caraway, Tom Duquesnoy, Brian Kelleher and Alejandro Perez.

Lacerda carries a 12-1 record. He finished Raulian Paiva with an anaconda choke on the regional scene in 2015.

Lightweight blue-chip prospect McKinney is set to clash against another highly-touted prospect in Bonfim.

McKinney has gone 3-1 in the Octagon, only losing to Drew Dober in a 2022 Round of the Year contender. “T.Wrecks” has turned aside Matt Frevola, Fares Ziam and Erick Gonzalez and now draws the 18-3 Bonfim, who is making his UFC debut. Bonfim defeated Nariman Abbasov on the Contender Series in September to earn his spot on the roster.

McKinney has a strong following already, so a win for Bonfim can catapult him onto the radars of many fans.

Jailton Almeida has propelled his way into the top prospect conversation at heavyweight after three dominant wins over Danilo Marques (at light heavyweight), Parker Porter and Anton Turkalj (technically at catchweight). The fan favorite among prospect watchers now draws his arguable toughest assignment yet in Shamil Abdurakhimov, a member of the UFC since 2015.

Abdurakhimov, riding a three-fight skid, has his back against the wall. The Russian heavyweight has fought the likes of Derrick Lewis, Curtis Blaydes, Sergei Pavlovich, Chris Daukas, Marcin Tybura, Andrei Arlovski, Walt Harris, Chase Sherman, and Tim Johnson. He clearly holds the most experience of any of Almeida’s past foes and presents an interesting challenge.

Can the grappling ace Almeida quickly dispatch Abdurakhimov as he has done to most previous opponents? Or will Abdurakhimov halt Almeida’s hype?

Bonfim enters his UFC debut undefeated at 13-0. He draws fellow prospect Lazzez in a fight that will determine who will take the next step at welterweight.

Bonfim punched his ticket to the UFC with a Contender Series win over then-undefeated Trey Waters, who he submitted with a Von Flue choke. Bonfim is a former LFA welterweight champion.

Lazzez is 2-1 in the UFC. He burst onto the scene with a convincing unanimous decision win over Abdul Razak Alhassan. He was TKO’d by Warlley Alves before getting back into the win column with a win over Ange Loosa.

Fan favorite “Robocop” Rodrigues will look to improve to 5-1 in the UFC when he meets the undefeated Octagon debutante Ferreira.

Rodrigues holds wins over Chidi Njokuani and Julian Marquez. A win would be his third in a row. Rankings-wise, Ferreira is a step back for Rodrigues, as he is making his UFC debut while Rodrigues should be a win away from a crack at the top-15 of middleweight. Maybe a win over the undefeated Ferreira gets him that?