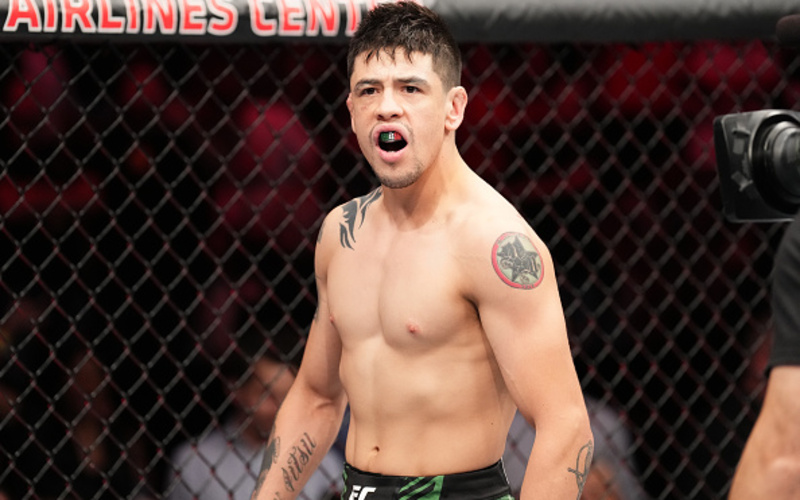 UFC 283 goes down this weekend and marks the UFC’s return to Rio de Janeiro, Brazil. Headlining the event will be a light heavyweight clash for the vacant title between Glover Teixeira and Jamahal Hill. It’s the co-main event that makes this card so intriguing, however. We will see a fourth fight between flyweight champion, Deiveson Figueiredo and interim champion, Brandon Moreno. The two men share a win a-piece and have also fought to a draw in one of the best rivalries we’ve seen in years.

Moreno has had a phenomenal career revival. From being the final pick on TUF 24, to being cut from the UFC, re-signing and going on a crazy title run, Moreno’s story has it all. Despite big wins against the likes of Figueiredo, Kai-Kara France and Brandon Royval, a win at UFC 283 could be the biggest of his career.

Two main factors play into this potentially being the biggest win of his life and we take a look at both of these.

A big issue ahead of his UFC 283 fight is who will corner Moreno for his fourth fight with Figueiredo. Ahead of his UFC 277 clash with Kara-France, Moreno had moved over to Glory MMA under the tutelage of James Krause. We saw a violent version of Moreno, who landed a savage liver kick to his opponent, folding him and ending things.

This left Moreno without a coach or a team ahead of a huge clash with Figueiredo. Moreno revealed to Ariel Helwani on The MMAHour that he had spoken to Krause with regards to the coaching situation:

“What’s hard when everything started… I was in Kansas City when the news came out. I had a long conversation with James, he told me the situation, and in that moment, I decided to turn the page quickly and decide what I wanted to do…next Monday I was in Las Vegas. The good part, the gameplan was already done, so I was ready to go by myself with my coaches”.

He later went on to reveal that he started to work with renowned trainer Sayif Saud at Fortis MMA:

“I decided to work with Sayif Saud, the coach of Fortis MMA. He’s very close with [my manager]…I feel very comfortable with him. It was very simple to work with him, and we closed this training camp in the best way possible” (Transcript courtesy of MMA News).

Coach Sayif about to hit the 80 win mark in the UFC and will be heading to Brazil next week 🔥 congratulations on team of the year 🙏 @fortismma @brandonmoreno@sayif_saud pic.twitter.com/T7neeY2vTi

It’s going to be difficult for Moreno without a doubt. There are no questions as to the credentials of Saud, he’s a top-quality coach and it could be a match made in heaven between Saud and Moreno, however, it’s a risk. It isn’t easy to have a new coach, with new methods and a new voice in your ear during fight week and on fight night. How much will this affect The Assassin Baby? We’ll have to wait to see on Saturday night.

The other factor to consider is that Moreno will be stepping into enemy territory to face Figueiredo. Born in Soure, Para, Brazil, The God of War will have the whole of Brazil behind him. He has a fan favourite style and rightfully so. Across 21 wins, he has 17 finishes, something that isn’t often seen at the lower weight classes. Nine of these have come via knockout, another thing that isn’t common at 125lbs.

UFC 283 marks the first time that Figueiredo has competed at home since 2018. Moreno has only fought in Brazil once, again going into enemy territory to defeat Jussier Formiga.

We know just how hostile the Brazillian crowd can be. Back in the days of Jose Aldo‘s prime, every arena he competed in in Brazil was rocking. The Brazillian fans get behind their fighters like few others. What’s important to remember is that every single fight at UFC 283 has a Brazillian fighter featured.

This could play out in one of two ways. It could totally kill the crowd. If some of the bigger Brazillian names suffer losses, for example, if Neil Magny defeats Gilbert Burns in the fight before the co-main, the crowd could be stunted. If Lauren Murphy upsets Jessica Andrade, how will the crowd react? They could be flat, which plays in Moreno’s favour.

With that being said, it could go the other way. If Burns and Andrade score big victories, if Johnny Walker pulls off a crazy flash knockout of which we know he is capable, the crowd could be full of energy and right behind Figueiredo.

Whatever happens, we know that Figueiredo and Moreno always put on a show and there’s nothing to suggest a fourth fight will be any different. UFC 283 should deliver and we can’t wait.