A few months back an idea was born. I thought wouldn’t it be cool to take an average Joe who loves the sport of MMA and give him six months to train in the sport and put him in a cage to fight. What we (mmasucka.com) thought would be cool is to document it. We found a hungry production team in VanWest Films and a documentary was born. My story is only going to be one part of the film, but I have begun training at West Coast BJJ in Port Coquitlam and putting my body through the ringer.

To say I’m super stoked to be training in the sport that I love is an understatement. It has already brought joy to my life. I’ve bruised up my arms and found out about aches and pains that I didn’t know could exist. The first thing West Coast Head Instructor Don Whitefield told me was to pace myself as my number one enemy could be injury. Don has constantly reminded me that it’s not only the body I need to worry about, but the mind. It’s not enough to come to class and work hard, but it is equally important to make sure that I work on my spirit and soul.

I’ve been introduced to Infrared Yoga. It’s heated yoga that allows the body to detoxify 7 times faster. Far infrared is safe; it is the same system that is used for premature baby cribs. I recommend visiting the Oxygen Yoga website to learn more about it and try it. 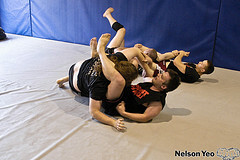 The filming began on August 10th and immediately I had a camera at my work and following me to my first day of training. My first class was No Gi BJJ. I was thrown in with the wolves and started rolling. I immediately got to feel what it was like to try and gain dominant positions. It’s not as easy as it looks. Passing guard is a lot more difficult than spinning the video game toggle button. I found that I was breathing heavily, my heart was pounding and I had no patience. I was submitted numerous times. However, one thing I appreciated was instructor Jason Gagnon who took some time to show me some technique; something that will come as time passes. It is trial by fire and allowing my mind and body to become one.

I have also been training in Muay Thai with instructor Shawn Albrecht. I’ve enjoyed the classes thus far. On Saturdays we spar and I have enjoyed getting in there and throwing down with the 16 oz gloves and working on the leg kicks. Cardio has been my biggest problem and I hope to have that rectified soon.

On Sunday (August 22) I took my first Gi BJJ class. All I can say is frustrating and disheartening. Not only was I owned by a 17 year old Blue Belt, but I just felt stupid and lost. Right now BJJ is a puzzle to me. There is so much to remember and I find myself stalling trying to think about what to do next. I keep getting myself into bad positions and submitted. I don’t have the vision or the feel for it yet. After that class my body started to tighten up and hurt. Monday will be Infrared Yoga day to stretch out the tightness.

Speaking of body, I started this training at 200lbs. I’m 32 years old and about 5’8 in height. I was overweight and out of shape. Don Whitefield informed me that I will be dropping to 155lbs! That’s right you read that properly…155lbs. He feels that it is the proper fighting weight for my frame. I haven’t been 155lbs since I was 18 years old. I use to be a skinny kid. I’ve been on a diet before and the lowest I could get was 165lbs. The first time I dieted a few years back the weight came off fast and easy. Last year I went on the same diet and it was a bit harder but within a couple of months I was able to get to about 175lbs. Of course keeping the weight off has been harder than losing it. I like to eat. However, I like to play sports too, and my weight gain doesn’t allow me to compete at my best. It has been frustrating and discouraging. 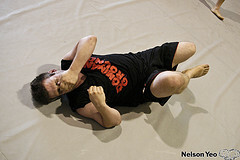 Right now I am watching everything I eat. I’m making sure I’m eating six to seven meals a day. When I say meals I don’t mean large scale. Here is an example of my diet.

6:30am Breakfast: Half a grapefruit, and two boiled eggs or a protein shake with a banana.

4pm Snack: Something like an apple or granola bar

Combine a ton of water and this is a diet that has worked for me in the past. However, Jason Gagnon at West Coast provided me with some tweaks that I can make to help the weight come off faster. After two weeks of training I am now 192lbs…I have lost 7lbs in 14 days. I would like a steeper decline so we will see what the next two weeks holds. The quicker I can get to a manageable weight the better my training will be. This is going to require a lot of discipline. I have the motivation to make this happen…everyone is watching.

There are days where I don’t want to train, and wonder what the hell am I doing? Right now I need a breakthrough to restore some confidence. The fight has already begun.

I want to thank Reign Full Contact for providing me with some Reign gear to train with. Seriously, if you are looking for training gear like shin guards, shorts, gloves etc…go to their website and have a gander. Support a Canadian company, more and more amateur fighters and pros like Ryan “The Real Deal” Ford are recognizing and wearing Reign.

I also want to thank DominantGround.com for the help and deals they have given me on gear too…check them out. They have a nice selection of rash guards, hoodies, gloves, t-shirts, shorts and more…all from quality MMA Brands for real fighters and real fans.

My mouth guard is being created at Klench. They make some sick custom mouth pieces.

I was also given some all natural weight loss pills from Fight Caps. They will definitely help with the weight cut. The last thank you goes to all the coaches and team mates at West Coast BJJ. If you are in the Vancouver/lower mainland area and are looking for a place to train, why not join up with one of the best schools in BC. Go to West Coast BJJ’s website, find a location near you and get started. I’m proud and privileged to be training with such great people.