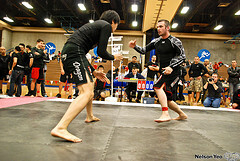 January 15th is the date. That is when I will be stepping into the cage for the very first time. A special thank you goes to Jay Golshani and the Battlefield Fight League. They will be having BattlefieldFL 5 at the River Rock Casino on January 15th and I am stoked to be a part of it. Get your tickets when they go on sale. I will keep you posted. I have a ton of friends and family that will be attending and I’m not sure if that is reassuring or nerve racking. 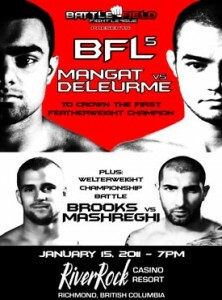 Right now my coaches are talking about who my opponent is going to be. A few names have come up, but I’m not concerned about that. I’m more concerned in making sure that I’m ready for the challenge. All of that other stuff will be worked out. It won’t matter who I’m facing, I have to make sure that I’m mentally and physically ready to go. One thing is for sure, you can expect a fight.

On that note, physically I am feeling good, but currently nursing a few aches and pains. I won’t call them injuries per say, but they are definite annoyances. A couple weeks ago I went to the Western Canadian Martial Arts Championships. I competed in the novice No Gi Grappling tournament and had a blast. Unfortunately there was some negative media attention on this event.

I will say this, and I don’t know if I’m in the majority or not but from my experience the WCMAC is a well run tournament made up of great people who volunteer their time so kids and adults can compete in many different disciplines, test themselves and learn. It is an extremely safe atmosphere. The event was  organized, safe, fun and everybody had a great time, except for a couple of sour grapes who for some reason felt they had an axe to grind. Sort of hypocritical since they entered their students in different competitions including the one they complained about. People have been asking me what I think of the whole thing. So I will quickly give you my thoughts but spare the details.

Sometimes choosing to stand on a soap box with best intentions does more damage than the actual issue. When an issue can be dealt with in house and face to face, that is the proper way to deal with it. Be a professional, be a man. Running to the media is more about selfishness and ego. Why anyone would want to bring negative attention to the sport they are involved with seems stupid and ignorant. Although I somewhat agree with the issues that were raised, unfortunately that was completely lost in the way it was presented. Instead it brought negativity to people who didn’t deserve it or want it. Why? So you can get your face on the front page and get more people into your gym? It actually came across as extremely hypocritical and self-aggrandizing. That’s all I’m going to say about that. We are all entitled to our opinion I guess. It’s a hot topic item. That will be the last time I mention it.

Back to the event. Like I said I competed in my first grappling tournament and unfortunately I was caught in a weight class that didn’t suit me. I was right at the cut off and because my registration was so last minute I didn’t have time to  shed a couple of pounds to compete with people who were more my size. My first opponent was a giant of a man. I held my own for the first few minutes, stuffed takedowns etc… I hesitated on a great opportunity for a single leg, and it cost me. He used his size to grind me to the ground and after some fighting to stay out of a submission, I got caught in some sort of chicken wing. I didn’t tap at first, but I could feel that I wasn’t going to get out of it and it hurt. I tapped and when I got up a very sharp pain shot through my entire left arm. 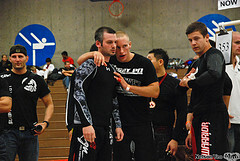 I pulled some muscles around my shoulder area and that was it for me. Was I disappointed? Yes because after my first experience grappling, I wanted to do it again. The nerves were gone, and I was ready to get back on the horse. Since that tournament I have tried to let my shoulder heal. Okay maybe not really, but I’ve tried not to over do it. I would come to class and it would feel fine, but when I was done, I would walk back to my car in pain. It’s something I am going to have to work through. Again, it’s more of an annoyance.

I’ve plateaued in my weight loss. I’ve been told that I may want to reduce my daily calorie intake even more as well as my coach Jason Gagnon said that I should pick up jogging first thing in the morning. So that is what I did.

The other day I dragged my ass out of bed at 5:30am. Put on the shorts and favorite hoodie and headed out into the cold morning. I ran 20 minutes and felt great! I haven’t been doing a lot of running in my routine, and I think it’s time. My running cardio completely surprised me and there was some confidence built. I was excited at the possibilities. Trust me, I tried picking up jogging last Summer when I was fat and out of shape, and it was discouraging. Now that I have got in a lot better shape, jogging isn’t so painful. Except for the last few meters of this particular jog.

I pulled my hamstring. I pushed it too hard and I could feel the tweak. This is the same hamstring that I have had problems with before playing flag football or ball hockey. It’s always the left leg. I have been limping around and taking a few days off. I know that when this thing flares up it’s a bitch to heal. My lesson? How about better stretching before running in the cold air? I had some momentum going and now I have lost some of it because of my reckless act. Injuries are my number one enemy I should have been more cognizant. I’ll be okay though.

This weekend I’m going to Victoria to cover Armageddon Fighting Championships 4 “Revelation” at the Bear Mountain Arena on Saturday. I always have a great time going to Victoria and visiting with colleagues and friends. AFC has been good to MMASucka.com and we really appreciate them allowing us to cover their event. Unfortunately, I have to wear a dress the night of the fights. I lost the first MMASucka Duel. Jeremy Brand and I went head to head with our UFC 121 picks and it came down to the final fight. I had Lesnar he had Velasquez. Now I am wearing a dress for AFC 4. I’ll take it like a man…or woman. A bet is a bet. Yes we will film it and yes we will post it. Other than that, should be an entertaining weekend.

Goals for Movember: Yes I’m growing a moustache for Movember. Prostate Cancer is a real killer so make sure you get your corn hole checked out. – Note to Jeremy- By a professional doctor

Goals: Beat the weight loss plateau, heal up a bit, and start jogging at 5:30am. Start working on game planning. I know what my strengths and weaknesses are. I would like to start sparring three, three minute rounds and get a feel for getting punched in the face with MMA Gloves.

I want to thank Reign Full Contact, Dominant Ground, Klench Kustom Mouthguards and a big thank you to Don Whitefield and all the guys at West Coast BJJ. I can’t say enough positive things about that school. If you want to learn BJJ or MMA go to the best school in the Lower Mainland, West Coast BJJ. There is a reason why their fighters have been winning at grappling tournaments and MMA. Check them out. I don’t endorse anything that I don’t believe in. Thanks for supporting me and MMASucka.com. I will be better with timing in writing the next Fighting Ambition Blog.