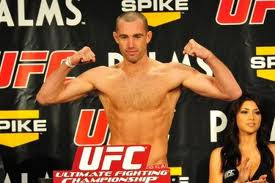 In a fight that a lot of people thought that Michael Johnson was supposed to win, Paul Sass proved the people wrong once again. The Englishman (12-0 MMA, 2-0 UFC) remained undefeated as defeated TUF 12 finalist Michael Johnson (9-6 MMA, 1-1 UFC) via submission (heel hook) at 3:00 of RD 1.

Sass tried a flying knee/kick before clinching and putting Johnson against the cage. Johnson escapes and pops him with a punch on the break. Sass moves forward and tries to pull guard, but Johnson easily avoids it. Sass lands a nice right, but Johnson returns fire with a knee, a flying knee, and a left as Sass trips to the mat. Johnson waits for him to stand. Sass again tries to close distance and pull guard, but Johnson snuffs it out. Sass again tries to pull guard, he ducks under a knee, grabs a knee, and drags Johnson to the mat. Sass has a leg and works from his back. Sass gets a heel hook and torques it. Johnson defends it, but Sass rolls to his stomach and forces the tap-out to remain undefeated.

Here is what Sass said immediately after the fight.

“Michael is a very tough opponent and I respected every part of his game coming in. I was surprised how long it took to get the submission in. I had it from one angle and I remembered my coach explaining how to get it from another way…I locked it on that way instead, straightened it out and he tapped. He’s a good fighter and the win means a lot to my career.”