At UFC 138 we almost ran the table. 4-1 was the record with Kid Yamamoto screwing things up.

Last week, I might have had too many of that Granville Island Winter Ale when I made that pick. However, 4-1 was not too shabby. 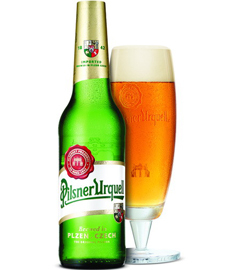 Before we move to my Half-Cut: UFC 139 picks, my beer choice for this event is Pilsner Urquell. The name literally means “pilsner from the original source,” making it the only true Pilsner in the world. Experts and judges have given Pilsner Urquell a score of 93 points, which is the highest rating ever given to a pilsner style lager due to its golden amber color, aromas of fresh baguette, caramelized nuts, citrus marmalade and earthy hops, honeyed nut toast and tart citrus flavors and rich body. I like the fact it doesn’t have too much of an after taste. Remember if you drink don’t drive!

Let’s hope UFC 139 leaves us with a pleasant after taste, because when you look at this card from top to bottom it’s hard not to get too excited. Tonight’s event is going to be, as the kids say, “bangin!”

On paper I look at this fight and feel that Hendo’s age could be the deciding factor. Yet I have felt that way every time Henderson has got into the cage the last two years and have been proven wrong. He obviously drinks from the same fountain that Randy Couture drank from.

The other thing I ponder is which Shogun are we going to see? A healthy, in shape Mauricio Shogun Rua could give Henderson fits. Shogun is known for his devastating stand up game, which includes some body kicks that can make an opponent’s gas tank go from full to empty within minutes. We also all know about Henderson’s H-bomb which is a devastating right hand that has put many to sleep.

But I don’t think it’s going to be the stand up game that will win this fight. Last time I checked, Henderson is still one of the best wrestlers in the division. Look for Henderson to be patient. He may take some shots and face an early barrage from Rua in the opening rounds, but this is a five-round main event and Henderson still has that legendary chin of granite.

If Henderson can grind his way to the third, fourth and fifth rounds I think he has a really good shot of winning this fight by decision. I believe Henderson will try and take this fight to the mat and attempt to throw some nasty ground n’ pound. For Shogun he needs to find his game that he had when he went to war with Machida twice. His most recent win over Forest Griffin was a step in the right direction.

This is a tough fight for me to call. However, like the Dos Santos vs. Velasquez fight, I said if Dos Santos can keep the fighting standing he had a shot. I say the same with this fight. If Shogun can keep the fight standing and work some leg and body kicks mixed in with some great combinations with out gassing, I like his chances. Unfortunately I don’t see that happening over five rounds. I’m going with Henderson by decision.

I like to read what other MMA News sites predict before I make my own predictions. I already have in my head who I think is going to win, but sometimes reading other people’s thoughts on how a fight is going to go, makes my decisions easier. So far a lot of people like Wanderlei Silva in this fight.

This is going to be a stand up war. Cung Le has more moves than a U-Haul truck. Sorry that was bad. But you get what I mean. Le throws kicks from everywhere including a spinning back kick that has made opponents look silly. The problem is that the San Shou Master has only fought three times since 2008 and his last fight was more than a year ago. Will Cung Le have cage rust?

Wanderlei lost to Chris Leben at UFC 132 by devastating KO. Some speculated and even called for his retirement. However he was a replacement opponent for Le after Vitor Belfort went down with an injury. Wanderlei likes to push the pace, but he is not the Axe Murderer from the Pride Days. He is only 35 going on 50. I know Silva will try and keep the fight in close quarters. He may even try to slow Le down with some leg kicks. But Wandy wants to avoid being on the outside looking in.

I love Wandy, but I don’t see how he wins this fight. I think Cung Le has a jab and vicious kicks that will keep Wandy to the outside. The only thing I worry about is Le’s gas tank. I’m taking Cung Le by TKO. Le will probably work some great combinations through kicks and vicious jabs. I think Le clips Silva with a punch and finishes him off in the second round for the TKO victory. Wanderlei Silva’s chin is the biggest question mark right now in this fight. I don’t like how some of questioned Le’s desire to be a fighter just because he has tried to make it in Hollywood. It has been a dream for Cung Le to fight in the UFC, I don’t see him taking this fight lightly or coming into it out of shape. We will probably see the most determined Cung Le we have ever seen which is bad news for the future hall of famer, Wanderlei Silva.

Faber is looking to get another shot at the Bantamweight title currently held by his arch nemesis Dominick Cruz. Bowles is looking to crash the party and get back to being one of the best Bantamweights in the world. People forget how good Bowles is and was. Unfortunately Bowles has had some injury problems that has kept him on the shelf and has taken away any momentum he has had in climbing the ladder. Yet I think a lot of people look at this fight and automatically take Faber because of his size and strength. Faber is great at always moving and keeping his opponents on their toes. He will try and push the pace to see if Bowles can keep up. I see Faber trying to set up the takedown and keep Bowles guessing.

The last thing Bowles wants is for Faber to take him down and control him from top position. Bowles is really going to have to figure out a way to keep the Sacramento native at bay. Easier said than done. At first glance, I’m like many, who are taking Faber in this fight.  However, if there is going to be an upset on this card I think this is the fight. In the past, Faber has been prone to throwing caution to the wind and in turn has taken some vicious shots. Bowles possesses some power in his hands, however, his hands end up taking the worst of the exchange, ie: the hand injuries. For some reason I think Faber takes a stiff right from Bowles and the fight ends. This is my upset fight pick. Call me crazy but I think this is set up for a Faber loss. I’m sure most will disagree, so if you decide to go the other way I don’t blame you. But I’m sticking to my hunch on this one. Read the title, “Half-Cut Picks.” Poor me another one.

I most recently did an interview with Kampmann and I found out rather quickly that this is a guy who is clearly motivated and frustrated at the same time. He has had two very close and controversial back-to-back losses to Jake Shields and Diego Sanchez.  He and others believe he won the fight against Sanchez and he is looking to take that frustration and apply it to Rick Story’s face. Kampmann believes the key to winning this fight is technical striking and keeping the fight on the outside. Kampmann does not want to get sucked into a standing brawl. Story likes to stand in the pocket and bang. For either opponent, hanging in the pocket for too long could be harmful to their health.

Story will probably try and use his striking to set up the take down. If Story can control Kampmann on the ground he has a shot at winning some rounds. I’m sure the tape of Kampmann vs. Shields is floating around Story’s training camp somewhere. The problem I see is, the Denmark native has got really good at sprawling. We saw this in the Sanchez fight at UFC Live 3, where Kampmann stuffed 14 take down attempts.

This fight is going to be a back and forth war. It is my early candidate for fight of the night. It’s going to be a close one but I think Kampmann has the experience and will most likely come in with a solid game plan. I’m taking Kampmann by decision. I think he will rack up enough points to finally get a decision to fall his way.

Above, I mentioned that the Kampmann vs. Story fight is my candidate for fight of the night. I know there are a lot of people who are hoping this one is also a strong candidate. On paper this looks like a fight that will wow the audience. To me, the key in this fight is Kingsbury’s wrestling. Although I have no doubt that these two will exchange a lot of stand up fodder, if I was game planning for Kingsbury I would want him to utilize his strong wrestling but pick those shots carefully. Bonnar is no joke and this is going to be a stiff test for Kingsbury, but I do think that the wrestling ability will win out. I like Kingsbury by decision. But man, I know a lot of people would love to see a KO or TKO here. Really looking forward to this match up.

Well, let’s see how we do. If we were to take all my above picks and put them into a parlay bet, a $5 wager would get you $171. Could be fun. Remember to know your limit and play within it.

Please have a good night watching the fights with your friends. Drink responsibily and if you have a beer you would like for us to try and promote, drop me a line on Twitter or in the comment section below. You can also send me hate mail on how stupid I was to take Bowles. 🙂