I wasn’t happy with the excitement level of the fight because I was more focused on winning. You can’t listen to the crowd in situations like this. You have to stick to your game plan and unfortunately tonight, it didn’t work.

I was watching him for a long time and waiting for the right opportunities. It wasn’t the same guy I thought I was going to fight. He was running from me a bit. I was trying to pick my shots. I wanted to outdo the main event and even though it’s not the fight I thought it would be, I’m happy.

Going forward at 2 and 0 I want to take my time and do it right. I want my fans on Twitter to tell me who they think is the best next fight for me. I”m waiting patiently for more opportunities.

I play with each person’s movement, I don’t do preconceived combinations. I also don’t have a formula going in. I play it based on what I see. I feel good about this win and I want to be on the Toronto card if possible. I have a big family and would love to fight in front of everyone back home. I’m sure they’re happy with how things went tonight.

“This performance wasn’t that great but I am happy to win. Nate Diaz is someone I want to fight. He’s at another level right now and I know I need to put three very impressive wins together to get back up there. But that’s what I am aiming for now that I am healthy.”

it was good but I wish I got what I really wanted: a knockout or a submission. I’m tired of getting decisions, I’m disappointed in myself for that reason but happy I got the win. My leg kicks had to take out his legs because he relies on his legs so much. It was a great fight, he’s a tough dude and he didn’t go down

Coach said he he touches your face, smash his, if he touches your bones, go for his body and I did it. Every fight is it’s own thing. Happy to get the win but I haven’t had a vacation since I started in UFC. I probably will turn the vacation into something other than that but my wife deserves it. She’s home with the kids and needs a break too.

Travis Browne def. Chad Griggs by Submission (Arm Triangle) at 2:29 of Round 1

I guess I must have walked into that knee, it rocked me pretty good. I knew he was going for the choke my brain wasn’t coinciding with my body. I never recovered from that knee. I gotta watch it on tape. I trained hard. He’s 6’7″ and fights can end quickly with big guys. But I should really be at 205.

this win means so much. I take my last win against Broughton personally as a loss. Against Struve and Griggs, they were the fights that are real wins. I can’t be stopped physically and mentally when I’m at my best. I wanted to push the pace. He was trying to get in my face and bully me but I put him against the fence and threw him down. For the finish, I felt the cage real close to me. That’s why I was on my knees I had to use my shin to keep him as far away as possible. I knew I had to stay there and use time instead of pressure.

I’m ready for whatever’s next.

Urijah Faber is my Favorite Fighter 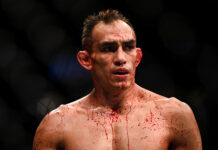