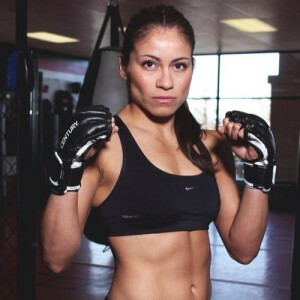 “Bad Mojo Jojo” is facing her second change of opponent for Invicta FC’s upcoming 6th card, with Sarah Schneider dropping out due to injury. She is being replaced by undefeated prospect Norma Rueda Center.

Joanne “JoJo” Calderwood (6-0) is the hottest European prospect in the women’s flyweight division. Her scintillating striking is already drawing comparisons to Anderson Silva, with her finished including a TKO by knee to the body of Ashley Cummins at Invicta 3. Will the Dinky Ninja team member be able to to take it to the relatively unknown Center?

Norma Rueda Center (2-0) is a flyweight that is a member of the much vaunted Jackson’s MMA camp. Her Invicta debut will be a big step up in competition, as her previous two fights were on small, regional shows. With one decision win and one submission, it would be fair to guess she’s a more of a grappler. Will she be able to shock the world with a win over Calderwood?

Invicta FC 6 is scheduled to go down on July 13th, 2013 at the Ameristar Casino Hotel in Kansas City, MO. The main event is a featherweight bout between former Strikeforce champion Cristiane “Cyborg” Justino and Marloes “Rumina” Coenen. For more on this and other Invicta FC events, stay tuned to MMASucka!