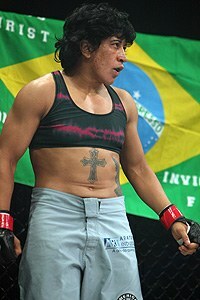 MMARising.com is reporting that Invicta FC 6 has lost “The Jewel”, as Julia Budd has apparently suffered a neck injury. Invicta will be keeping it’s Canadian content, however, as “Not So Sweet” Tweet has been tapped as her replacement against Ediane “India” Gomes in the featherweight bout.

Ediane “India” Gomes (10-2) is a two time Invicta FC veteran, with victories over Katalina Malungahu and Hiroko Yamanaka in her past two fights. The American Top Team member is a joint lock specialist, with 6 victories by armbar and one by ankle lock. Will she be able to repeat this success against the Saskatchewan native, Tweet?

Charmaine “Not So Sweet” Tweet (4-3) made minor headlines at the end of last year after a dispute with Super Fight League over non-payment. The controversy appears to have fired her up, as she has racked up two more first round victories since her win over Puja Kadian for the Indian promotion. Will Tweet be able to make it 4 in a row with a victory over the veteran Gomes?

Invicta FC 6 goes down July 13th at the Ameristar Casino Hotel in Kansas City, MO. The card is scheduled to be headlined by a featherweight bout between former Strikeforce champ Cristiane “Cyborg” Justino and Marloes “Rumina” Coenen. Stay tuned to MMASucka for more on this and other Invicta FC events.