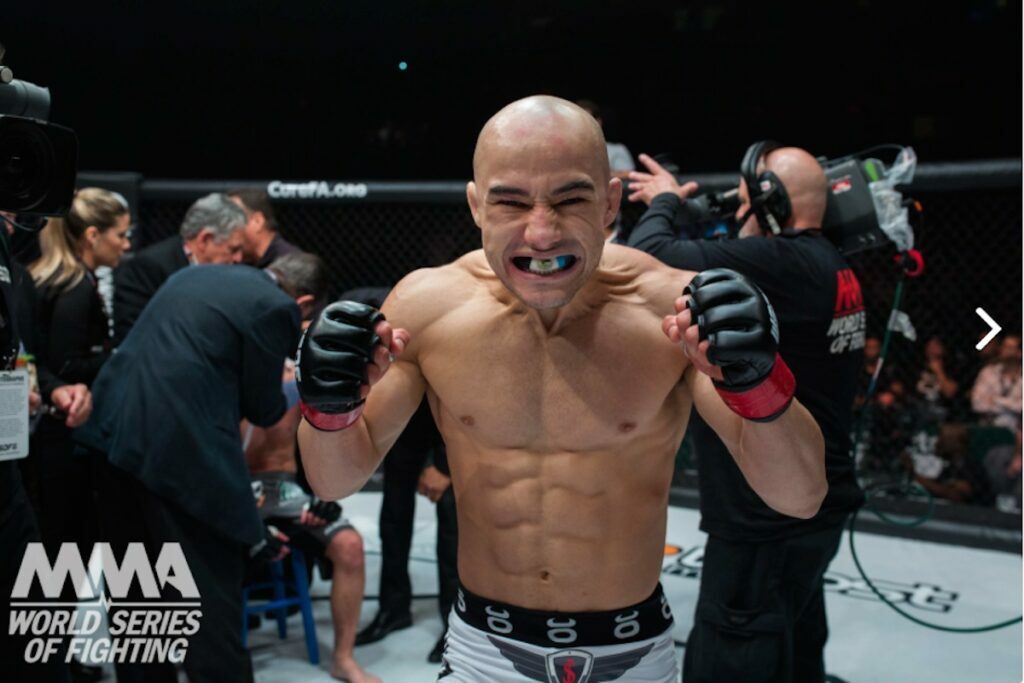 Next Fight: Josh Hill at WSOF 18

In a rare Thursday night fight card, on February 12, 2015 from the Edmonton Expo Centre, from Edmonton, Alberta we’ve got WSOF 18. The main event pits Bantamweight Champion Marlon Moraes against former Ultimate Fighter competitor Josh Hill. Moraes is on a current eight-fight win streak, while Josh Hill has won 10 in a row. It’s a fight you’re not going to want to miss.

The champion Marlon Moraes recently stopped by to have a word with MMA Sucka. Here’s the interview.

Your next fight is February 12, 2015 at World Series of Fighting 18 in Edmonton, Alberta, Canada. Your opponent, Josh Hill, is Canadian – is there any added pressure fighting Hill in his home country?

[quote]No pressure at all, when the cage doors close it’s just me and my opponent so doesn’t matter where you’re fighting. The only thing that matters is if you are ready, and I’m ready to fight anybody, anywhere at 135lbs. So happy to be fighting in Canada for Canadian fans.[/quote]

You started you MMA career 5-4-1, but have gone 8-0 since the end of 2011. Any specific reason for the career turnaround? What do you contribute as the main reasons for your recent success of late?

[quote]Hard work. MMA is a very difficult sport – you’re on or you’re not. I decided to live the sport and learn all aspects of the game. In the beginning I was a kickboxer with jiu jitsu, but today I feel like a complete martial artist. Of course my teammates and friends Mark Henry, Anderson Franca, Ricardo Almeida, Frankie Edgar, Edson Barboza, Cris Ligouri are big part of it, I’ve been learning with them everyday.[/quote]

You’re about two weeks out from your fight with Hill – take us through a typical day of training in the life of the bantamweight champion.

[quote]My normal schedule is two practices a day. We train in the morning and afternoon, sometimes we go far for sparring and we do end up getting home late. I like to be home around 7-730pm to spend some time with my family when possible.[/quote]

What’s your best/proudest career moment thus far. Any thing you’d like to accomplish or any specific opponent you’d like to fight in the next year or two?

[quote]Proudest moment was when I fought three opponents in a super eight kickboxing tournament in the same night to win the tournament. I would say I want to fight the best in the world, beat him and prove that I’m best 135 in the world.[/quote]

You fought twice in 2014, looking spectacular in both performances I might add. Are you happy with two fights in a year or would you like to be a little more active in 2015?

[quote]I want to fight every two months if possible. I love to fight. If I fight four times in 2015 I will be happy.[/quote]

A lot of people doubt the level of competition you’re facing in WSOF, questioning whether you’re truly a top 10 Bantamweight in the world – what do you say to that? Are you happy with the level of competition you’ve faced in WSOF so far? Do you see yourself fulfilling the remaining fights on your contract with them or are you hopeful for a move to the UFC in the near future?

[quote]They’ve got to be kidding if they don’t have me as a top 10. I’m definitely top 5, without a doubt. I would say bring whoever they think is at the top to me and they will see where I belong. I’m happy with WSOF, love to see the organization growing and I’m 100% WSOF.[/quote]

You’re the bantamweight champion, would you ever be open to moving up to 145lbs for a featherweight “Super Fight” with WSOF champion Lance Palmer?

[quote]Yes. Love the idea, cutting weight sometimes sucks, so it will be easy to make 145lbs.[/quote]

Prediction for the fight – Moraes batters Hill on the feet for the first three rounds (watch out for leg kicks), before following Hill to the mat and applying a rear-naked choke, forcing the tap out and retaining his bantamweight championship. Moraes defeats Hill via fourth round submission.