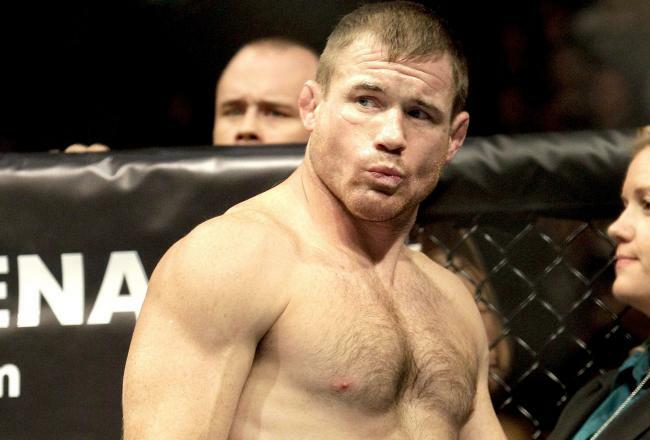 The first inductees for the new look UFC Hall of Fame have been announced. Jeff Blatnick – a key personality during the UFC’s formative years – and the April 2005 rematch between Matt Hughes and Frank Trigg will be inducted as in this year’s Contributor and Fight categories, respectively.

Jeff Blatnick, Matt Hughes and Frank Trigg to be inducted into UFC Hall of Fame

The announcements were made moments ago on UFC Tonight, the UFC’s official magazine show on FOX Sports 1. The formal induction will take place at a gala event on Saturday, July 11 at the UFC Fan Expo, during the UFC’s annual International Fight Week.

Jeff Blatnick will be posthumously inducted as a UFC Hall of Fame Contributor, in recognition for his historically significant services to the UFC and the sport of mixed martial arts.

UFC President Dana White said: “Jeff Blatnick is a name that newer fans may not be familiar with, but this guy was a huge part on the UFC’s development in the 1990s. He pushed for greater regulation, unified rules and – because he was an Olympic gold medalist in wrestling – he had credibility with everyone in the sport. It is our honor to recognize his huge contributions to the UFC by inducting him into the UFC Hall of Fame.”

Blatnick’s story is an incredible one. In 1982 he was diagnosed with Hodgkin’s lymphoma – a form of cancer – and had to undergo life-saving surgery and chemotherapy. Astonishingly, he won the super-heavyweight Greco-Roman wrestling gold medal at the Los Angeles Olympics in Los Angeles less than two years later. He became a national hero and inspiration for cancer patients worldwide.

A decade later, Blatnick caught an early UFC event. He immediately recognized the sport behind the spectacle and joined the organization as lead color commentator from UFC 4 (December 1994) through to UFC 34 (November 2001). In those seven years at Octagonside, Blatnick educated a generation of fight fans on the finer points of grappling and sportsmanship. But, perhaps more importantly, as the Commissioner of the UFC (1998 to 2001) Blatnick is widely credited with coining the term “mixed martial arts” and championing its use to describe the emerging sport.

As Commissioner, Blatnick served as a key member of the group who drew up what would become the Unified Rules of Mixed Martial Arts – the framework for all regulated MMA around the world to this day. In his later years, the New York born Blatnick served as an MMA judge for many different state commissions; in fact Blatnick’s final contribution to the UFC came as a ringside judge at the UFC 152 event, just weeks before he passed away in October 2012.

She said: “Jeff would have been so honored to be inducted into the UFC Hall of Fame. It’s awesome, and it is right that he is recognized. He worked so hard to improve the sport and keep it alive in the 1990s. People in the industry, or have been around the UFC for years, they know what Jeff did behind the scenes but the viewers who watch the fights today probably haven’t heard of him. That’s probably because of Jeff’s character, he was very humble and didn’t like to talk about himself. But it is great he will now be recognized in such a huge way.”

Joining Blatnick in the class of 2015 will be Matt Hughes and Frank Trigg, who will be inducted together for their April 2005 rematch in the newly-minted Fight wing of the UFC Hall of Fame.

Hughes vs Trigg II took place on April 16, 2005, at UFC 52 at the MGM Grand in Las Vegas. It was a rematch from 2003, where UFC welterweight champion Hughes defeated reigning WFA champion Trigg inside four minutes.

Trigg won two bouts to earn a chance to avenge his loss to Hughes, and the build-up to the rematch saw Trigg goad the champion with a relentless campaign of insults.

UFC President Dana White said: “I’ve said it a million times over the last 10 years, Hughes vs Trigg II is one of my favorite fights ever. In four minutes five seconds, it showed everything that is great about the UFC.”

The full fight can be watched on UFC FIGHT PASS here: http://www.ufc.tv/video/matt-hughes-vs-frank-trigg-ufc-52

Hughes now becomes a two-time UFC Hall of Famer, having already been recognized by the Hall in 2010 for a legendary career which included two reigns as UFC welterweight champion.

Hughes said: “When I got my hand raised, I thought I’d just come through a tough fight. It was only afterwards, when my team were congratulating me on this great win, that I started to realize this wasn’t just another fight. Then Dana called me a few days later telling me it was the best fight he’d ever seen and, in the years since, I get asked about that one rematch with Trigg about as much as I do any big fight I’ve ever been in.”

Hughes added: “I occasionally get invited to speak to servicemen, and I try and speak to them about never giving up when they are in bad situations. The fight I use as an example is the second Trigg fight; I was in a very bad situation, I’d been hit low, I was hurt, rocked, Trigg had my back and he had me in a choke. But I didn’t panic and as long as you don’t panic, you don’t quit on yourself and you have a little time, you can get out of even the worst of situations.”

Trigg said: “This is a great honor. Every great fight has a winner and a loser, but I am very proud that, 10 years on, people still ask me about this fight. I may not have won the UFC title that night, but this goes some way to make up for that.”

The inductees in the Modern Era and Pioneer Era categories will be announced this weekend as part of scheduled UFC 187 programming.

To visit the UFC Hall of Fame fight library – which includes the induction speeches for the first 12 UFC Hall of Famers – go to www.ufc.tv/category/ufc-hall-of-fame-library.