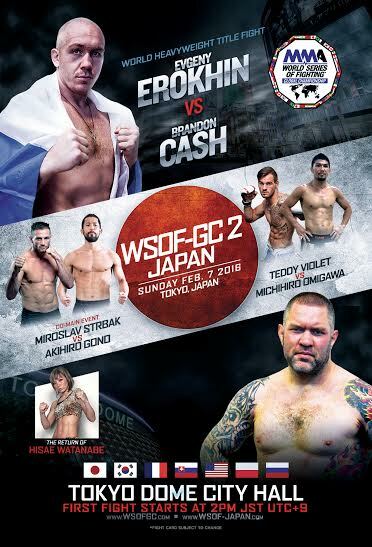 LAS VEGAS, NV  February 6, 2016  World Series of Fighting – Global Championship (WSOF-GC) completed weigh-ins at Tokyo Dome Hotel on the eve of their inaugural event in Tokyo, Japan. All fighters were on weight with the exception of Akihiro Gono, who missed his mark of 155 by coming in four pounds over. On the advice of the doctors and the Director of Regulatory Affairs, Ralph Cook, Gono did not continue his weight cut and the opponent accepted his weigh-in mark of 159 pounds.

“In the interest of fighter safety, everyone felt it was best that Gono not place any further stress on his body,” said WSOF Global President, Shawn Wright. “We value and respect the decisions of the doctors and the people we have hired to ensure that our athletes are not in any unnecessary physical dangers. Gono will undergo another full physical tomorrow before the competition to ensure that there aren’t any additional issues or concerns. We all expect and feel that he will be able to compete at that time.” Gono will be fined 20% of his fight purse for failure to make weight and given to Strbak for accepting the fight under the conditions outlined above.

All other fighters made their marks without any issues, including the headlined main event between Evgeny Erokhin (225) and Brandon Cash (256). “This is a battle of two heavyweights that are both on extensive knockout win streaks,” said Vice President of Operations & Matchmaker, Jason Lilly. “The arena is going to shake when these two men collide. One of them will be leaving with the inaugural WSOF-GC World Heavyweight Championship.”

Tickets are on sale and can be purchased at http://www.wsof-japan.com/

SHOUT is a real-time fan engagement application for smart phones and mobile devices. Players compete head-to-head for valuable prizes ranging from gift card to iPads to motorcycles. SHOUT TV’s real-time challenges have engaged and entertained fans competing against each other during the Super Bowl, soccer, NFL, NBA, and MLB, as well as Daytona 500, Oscars, Grammys, and reality shows like “The Bachelor”.

Headquartered in Deerfield, Illinois, Beam is traded on the New York Stock Exchange under the ticker symbol BEAM and is included in the S&P 500 Index and the MSCI World Index. For more information on Beam, its brands, and its commitment to social responsibility, please visit www.beamglobal.com and www.drinksmart.com.