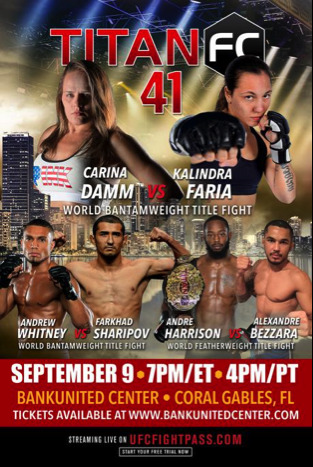 Titan FC will return to the Bank United Center in Coral Gables for the third event in a row as they present Titan FC 41. The event is scheduled for Friday, September 9 and will feature a main event between Carina Damm and Kalindra Faria to determine the first Titan FC women’s bantamweight champion. The event will stream live and exclusively on UFC Fight Pass.

Bantamweights Andrew Whitney and Farkhad Sharipov will meet in the finals of the bantamweight tournament to determine a new 135lb., champion. Whitney advanced to the finals with a thrilling second round TKO over Anderson Dos Santos. Sharipov, a late entry into the tournament, punched his ticket to the finals with a split decision victory over Bruce Lutchmedial. Featherweight champion Andre Harrison will attempt to defend his title for the fourth time, as he will face Alexandre Bezarra. The Daddas Fight Camp featherweight is 18-4 with 16 finishes, including 11 via submission.

“Titan FC is in the midst of an incredibly exciting time,” COO Lex McMahon stated. “We have firmly established South Florida as our home and mecca of MMA. We look forward to building on that momentum and energy by delivering the best card to date which will feature an amazing WMMA bantamweight title fight as well as the mens bantamweight tournament finals and title bout.”

For information on how to purchase tickets for Titan FC 41 please visit The Bank United Center box office by clicking here. Fans can also watch the event live and exclusively on UFC Fight Pass.