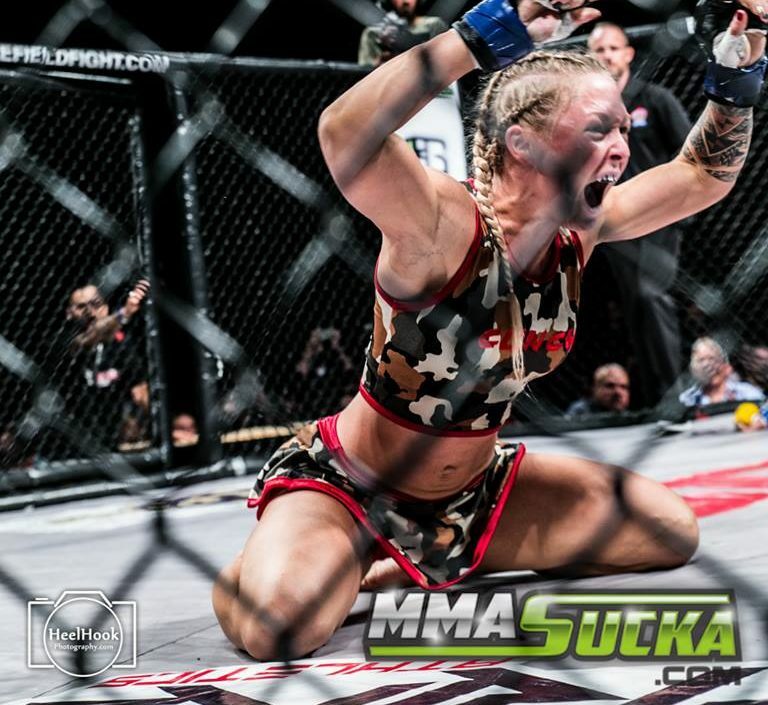 My name is Shawna

I am a 30-year-old, mother of two (well four if you count my two dogs) and i train out of CLINCH MMA in Port Coquitlam, British Columbia.

My journey into mixed martial arts happened very organically. I started lifting weights heavily just after my daughter was born in 2011. After doing that, I became fascinated with the way my body was changing, so i decided to start competing in the Bikini division of fitness competitions. I did a brief two year stretch competing locally, never made it to the “BIG” shows.

I never really felt fulfilled from it. At that time my husband was running CLINCH out of Burnaby and with two small children and living so far, I rarely made it out to partake in classes.

It wasn’t until December 2014, when Clinch moved locations from Burnaby to Port Coquitlam that I was really able to develop a love for the sport. I eagerly started training two to three times a day, my mind was always ready and excited to learn new things. I became confident in myself.

I thought three months into it, “lets really try and test myself.” So I entered my first BJJ tournament and I laugh about it now because at that time I had no clue what i was doing. I was just doing it based on aggression. I did another tournament in May while i was dieting for a Bikini show and I decided that  that would be the last bikini show I would do.

After that, I told my coach that I want to fight. Maybe I’ll be good, maybe not, but I want to try and I want my kids to know its OK to try new things at anytime in your life. I had never trained, and by trained I mean real time training. I had never been punched and the only mat time I got over the last six years was rolling around with my husband on our hardwood floor late at night when he came home from work.

Everything I have learned is from my coach and the constant time he spends explaining, drilling and teaching me. That’s how my journey started.

Now on to present day…

Some people use the holidays as an excuse, an excuse to unplug and unwind. That is just not the case for me. I can relax after my last training session and when my list of things to do are done.

I always tell myself, life is tough some days especially going into a fight camp. The mood swings, the emotional roller-coasters are just a small piece of what you endure on a daily basis.

I have a family and a house to take care of. I am the glue that keeps everything together in my house. So training is a privilege for me. I have no choice but to keep it together.

If you ask me what my typical day consists of; I would tell you my day is not so typical. Everyday is different but it usually all starts the same. I wake up, run or do conditioning, wake kids up and get them all ready for school. I then take them to school as I stand outside (this year was bad) and volunteer my time. Come home, cook and pack up meals, do dishes (because I can’t stand mess), go train, go pick the kids up, and this is where it takes off in different directions but for today we will stick with a “Typical Monday.”

After school, I drive my daughter to dance, drive to Clinch MMA after to teach a kids class, I train two more classes, go home, feed everyone dinner, get the kids ready for bed, clean the house and do laundry. I then possibly go to bed.

Although I don’t have my life 100% together most days, the constant being on the move helps me with the mental part of fighting.. I really don’t think about winning or losing, I don’t have time to think about that — I think about fighting and that’s it.

Keep it locked to MMASucka.com for more Diaries from Shawna leading up to her next bout.