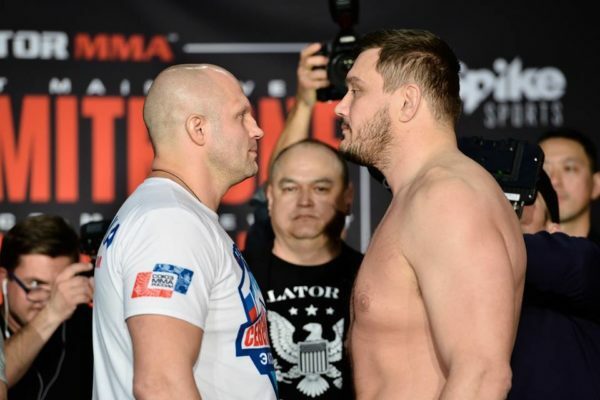 The return of Fedor Emelianenko has been abruptly put on hold. The “Last Emperor” was set to square off against former UFC veteran Matt Mitrione in the main event bout of Bellator 172. However this afternoon, it has been reported by Ariel Helwani and Bellator President Scott Coker that the fight has officially been canceled after Mitrione pulled out due to sickness.

According to MMA Fighting‘s Ariel Helwani, the fight appears to be officially cancelled.

Shortly afterward, Bellator President Scott Coker confirmed the news via his twitter account. Coker went on to detail that the new main event for Bellator 172 will feature Josh Thomson vs. Patricky Freire.

Due to illness, @mattmitrione will be unable to compete tonight at #Bellator172. @THEREALPUNK vs @PatrickyPitbull promoted to main event.

According to a press release from Bellator, the company had this to say regarding the cancellation of the main event:

Due to illness, Matt Mitrione (11-5) is unable to compete at Bellator 172 and as a result, his highly-anticipated matchup with Fedor Emelianenko (36-4, 1 NC) has been scratched from tonight’s event. Bellator officials will look to reschedule the fight at a later date.

For fans that bought tickets to tonight’s Bellator 172 event, the California State Athletic Commission is offering full refunds before the start of the event.

According to Helwani, the promotion scrambled to find a late replacement opponent for Emelianenko but was unable to secure one in time. Helwani reports that Chael Sonnen was one of the fighters willing to step up and fight on short notice but it was unable to be completed in time.

Chael Sonnen offered to fight Fedor on just hours notice, I’m told. He was ready to go. Bellator was interested but it didn’t come together.

This is a tremendous blow for Bellator as the promotion has garnered significant momentum so far in 2017. As a pioneer of MMA and a massive fan-favourite, the return of Fedor Emelianenko has generated a lot of interest for not only the fighters but the promotion itself.

Check MMASucka as more details on this developing story unfold.