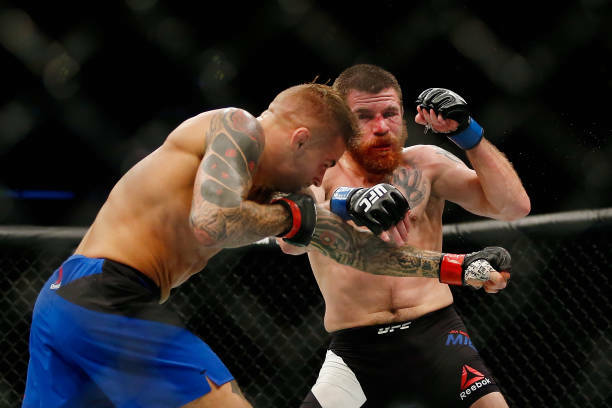 On February 11 live from Brooklyn, New York, the UFC 208 pay-per-view opened with what was sure to be an absolute banger in the lightweight division.

Louisiana’s Dustin “The Diamond” Poirier put his 20-5 record up against one of the grittiest lightweights on the roster in the form of New Jersey’s Jim Miller, who was hoping to get win number twenty-nine of his professional career.

MMA Sucka‘s ‘Fight of the Month’ for February 2017: Veteran lightweights go to war at UFC 208

Right as the fight began, UFC commentator Joe Rogan said that Jim Miller “usually thrives on wars”. And that has been the case for the entirety of his near-decade-long stint in the UFC. However, Poirier was not much different. Primarily known for his beautifully crisp striking ability, Poirier is also no slouch on the mat, as he has six submission wins to compliment his ten knockouts. Miller, though far more known for his grappling ability, also has very underrated boxing. Though it’s easy to see where the confusion comes from, as he only has four knockout wins on his resume compared to his thirteen submissions.

The entire fight, for the most part, was contested on the feet. Both guys had their moments of landing clean shots. Round one was a very close one. Both men had their moments on the feet, but arguably the most significant part of the round was Miller getting the fight to the mat later and nearly securing a choke before losing position. The final ten seconds saw both men wildly swinging until the final bell.

Round two was more striking, but this time the round clearly belonged to Poirier. Though Miller remained tough, Poirier landed multiple hard shots and had Miller wobbled multiple times. Miller did not get dropped, though, which speaks to that highly-touted toughness of his.

Round three saw Jim Miller nearly demobilize Poirier with brutal leg kicks. Late in the round, Poirier ended up getting a much-needed takedown and was able to hang out in top position for the better part of the final two and a half minutes of the round.

When the final bell sounded, Poirier immediately laid down on the canvas briefly before standing up and walking around the cage with a noticeable limp before being seated on a stool.

Poirier wound up winning the fight by a majority decision after one judge scored the fight as a draw, and the other two scored it for Dustin Poirier (29-28, 30-27).

February 2017 was a pretty solid month of fights. So check out some honorable mentions below to see some of the best fights from the UFC, LFA, ACB, and SFL during February!