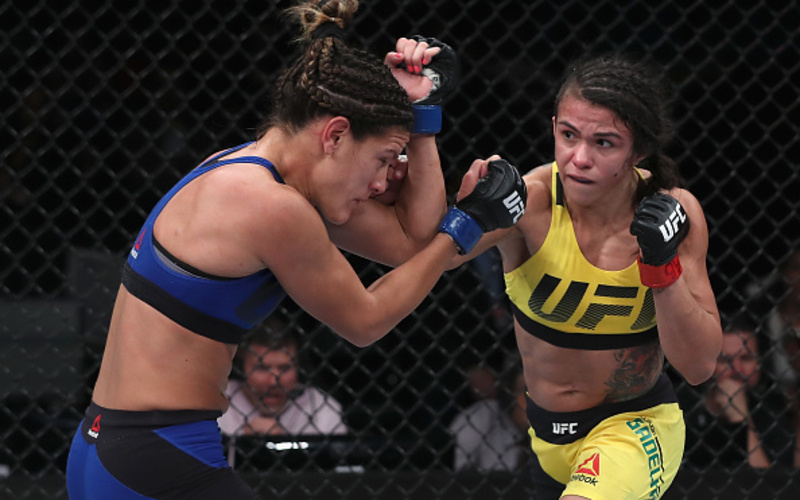 The UFC added two of the best strawweights on the planet, Claudia Gadelha and Karolina Kowalkiewicz, to UFC 212, the promotion announced on Monday via Twitter.

Both Gadelha (14-2 MMA, 3-2 UFC) and Kowalkiewicz (10-1 MMA, 3-1 UFC) have lost to only one woman in their entire professional mixed martial arts careers: Joanna Jedrzejczyk, the reigning strawweight champion. Barring a draw or a no contest, that will change for one woman.

Gadelha got herself back in the win column following an unsuccessful title bid when she dominated Cortney Casey en route to a unanimous decision at UFC Fight Night 100. Following a coaching stint on The Ultimate Fighter: Season 23 opposite Jedrzejczyk, Gadelha had sought revenge on the Polish champ for defeating her in their first contest in a controversial split decision. It wasn’t meant to be, as Jedrzejczyk rallied in the final three rounds of their title fight to pull out a clear unanimous decision win.

Kowalkiewicz lost to Jedrzejczyk in her most recent fight at UFC 205. She was largely out-struck by the champion. Outside of a moment in the fourth round where Kowalkiewicz rocked Jedrzejczyk, the champion coasted to a unanimous decision win. Kowalkiewicz had earned her shot with three UFC wins in a row over Randa Markos, Heather Clark and Rose Namajunas.

Gadelha and Kowalkiewicz could very well be fighting for another crack at the champion, who will defend her title at UFC 211 in May against Jessica Andrade. UFC 212 also takes place two months after Namajunas and Michelle Waterson are set to clash in May. Fans may get a better sense of the title implications of Gadelha vs. Karolina following the aftermath of that fight.

The two top contenders will likely put on an exciting and classical striker vs. grappler match-up. UFC 212 takes place in Rio de Janeiro, Brazil on June 3. The card looks as follows so far: