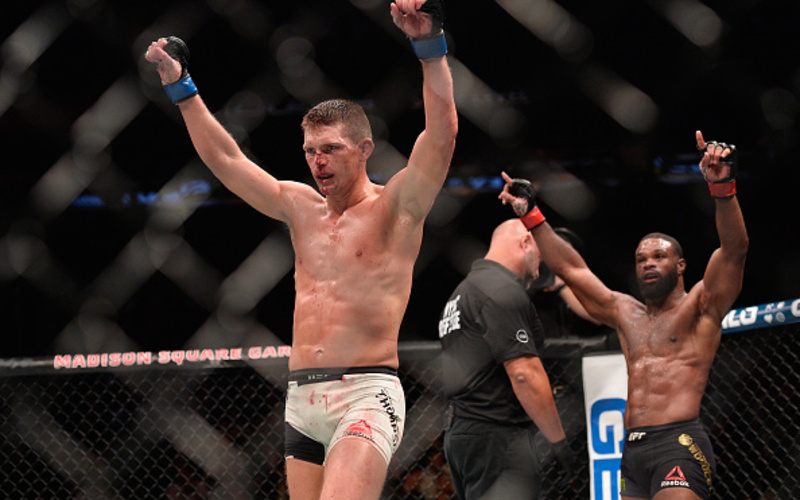 The entire night of UFC 205 back in November was simply magical. There is just something in the air when a Conor McGregor led card rolls around that never disappoints. From the Lawler-MacDonald war we saw at UFC 189 to the insane finish by Miesha Tate choking Holly Holm unconscious to capture UFC gold. And somewhere Glover Teixeira is still looking for his tooth that Anthony Rumble Johnson sent into orbit when he knocked out Glover in just seconds in the co-main of the Conor-Nate rematch at UFC 202 in August.

For UFC 205 the co-main extravaganza was the classic match put on by Tyron Woodley and Stephen “Wonderboy” Thompson. A fight where the only thing crazier than what happened during the fight was the aftermath that followed in the decision.

Every great MMA fight needs a back and forth of momentum shifts, potential fight ending moments and their first clash had plenty of it. Add in a raucous crowd who got behind Wonderboy after a week of Conor and Woodley sniping back and forth at one another and the atmosphere hit a whole other level as the fight hit its peaks and valleys. Tyron Woodley and Stephen Thompson will now run it back again at UFC 209.

The first round saw Woodley take Wonderboy to the ground and proceed to maul him for most of the round and land an elbow that left Thompson trying to find his corner after the bell rang while muttering to himself that he couldn’t see because of the blood in his eyes. This round has been one of the most discussed heading into the rematch, as many of us wonder why the defending champ never went back to his wrestling and top game that Thompson really never had an answer for. What would happen if Woodley implemented this strategy in the second fight instead of choosing to stand and trade with a literal ninja for almost 20 minutes?

And then there’s the strategy Woodley displayed in the 4th round of simply trying to knock Wonderboy’s head into the 12th row. He dropped the challenger twice in that round and the second one as displayed by Thompson’s open mouth sideways stare as he dropped, sent him into the land of ghosts and it still seems almost impossible that he survived the barrage of fists and knees Woodley threw his way to try and finish him. However he did survive not just that onslaught but also the vice grip guillotine that Woodley clamped on his neck shortly after. Woodley cranked on his neck and his plea for a tap was instead met with punches to the body.

Not only did he survive, he ended a round that saw his face get re-arranged on top of the champion landing ground and pound as the Irish crowd sang their little hearts out in appreciation. While the biggest moments of the fight belonged to Woodley and he was the only fighter who was close to fight ending moments, the rest of the time in the cage he spent fighting at range with a karate master and getting out-pointed and tagged multiple times. The decision to stand right in front of Thompson often with his back against the cage and exchange is just as mind boggling as his decision not to return to the wrestling game that brought him so much success early on in the bout.

Going into the rematch on March 4, much of the discussion has been about what adjustments each fighter will make the second time around and there’s adjustments on each side that you could easily see making a big difference.

Wonderboy failed to open up and let his kicks go, after Woodley managed to catch one and drag him to the ground and that arguably led to Tyron being able to move forward and land a few of those bombs without having to hesitate while worrying about eating a heel to the chin in the process. Obviously Thompson’s biggest weapon that strikes fear into the heart of his opponents are his kicks, and specifically all the techniques he can pull off with his front leg that are lightning fast. Poor Johny Hendricks was walking into a buzzsaw. He is a former champion and looked like he was fighting an alien when trying to get past that front leg to close the distance and land power shots. Wonderboy used this a little in the beginning of the title fight at 205, but after being taken down was content to throw his kicks sparingly and attempt to out-point Woodley with his hands. Wonderboy has to find a way to avoid being taken to the ground while still letting his kicks go. His karate style kicks can make the champion hesitant to move in and rush him and keep those nuclear fists away from his head this time. He made Woodley fight defensively until the 4th round and if he can keep him on his heels for the entire 25-minutes this time around we could very well see a new champion crowned.

For Tyron Woodley he has to not only use his high caliber wrestling game to control top position and land some of that brutal ground and pound more consistently than in November, but he really has to be conscious of not letting himself get backed up and pinned against the cage for prolonged amounts of time in this scrap. There were a few moments where Wonderboy caught him backing up against the cage and was able to unload on him a bit with some pin point punches and a few brutal spinning kicks to the body. If he gives his challenger the opportunity to land one of those to his liver or worst case scenario one lands across his temple it could spell doom for the current champ. Playing at distance with a karate master probably isn’t the best way to try and win this fight and doing so with your back pinned to the fence with no where to go is an even worse idea. Tyron’s path to victory are by knockout or domination on the ground if he can take the fight there, it’s hard to see a path to a win for him that included engaging in a point karate contest with Stephen Thompson.

No matter who comes out on top and no matter how many times it takes for Bruce Buffer to announce the correct decision this time, on March 4th we will get the final chapter in a story that we have been waiting on since that magical night in Madison Square Garden. We could see a new fan favorite crowned king of the welterweight division or a terrifyingly powerful champ continue his reign, or just because the MMA gods like to screw with us we could see another draw. Either way, fingers crossed that we see another classic between these two when they clash again inside T-Mobile Arena.