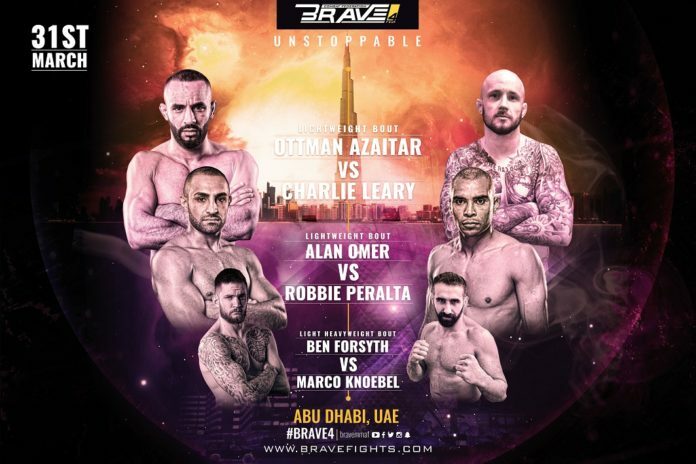 Officially announced last Saturday (25), the Brave 4 card, scheduled to take place in Abu Dhabi (EUA), is taking shape. As reported first by the German website GNP1.de, all-in-once, the promotion confirmed three fighters for March 31st card. All the bouts involve athletes with any relation with Germany, whether is being born in the European country or current residents.

The first man on the list is Alan Omer, the Stuttgart-based fighter will go up to the lightweight division, after having a shot for Brave’s inaugural featherweight title — and losing it due to a severe injury weeks before the event. With 19 wins and 5 losses as a professional, Omer will face the veteran Robbie Peralta (18-7-1NC).

Other important German-Middle Eastern fighter to join the card was Ottman Azaitar. The very popular “Bulldozer” is one of the most popular MMA fighters in the region, comes back from a quickly win over Kevin Koldobsky in December. The unbeaten Ottman will face the four-time European MMA champion Charlie Leary.

Last, but no least, an European clash between Germany’s Marco Knoebel and Ireland’s Ben Forsyth. After an upset at Brave 2, when he was dominated by Tyree Fortune, SBG’s Forsyth (2-1) will try to bounce back against the newcomer Knoebel (4-1).

Brave 4: Unstoppable is set to take place on March 31st, at the IPIC Arena at Zayed Sports City, in Abu Dhabi. The main event of the evening is the first ever Brave title fight, in the featherweight division, between Elias Boudegzdame and Masio Fullen.