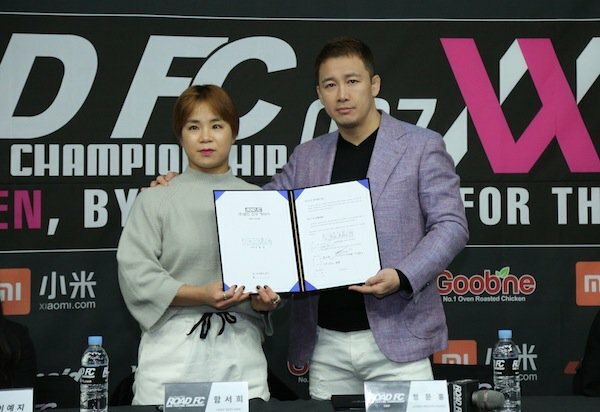 It didn’t take long for Jewels & Smackgirl veteran Seo Hee Ham to be picked up following her release from the UFC.

“Hamderlei Silva” will head back to ROAD FC. The signing was announced via the ROAD FC website.

Regarding the signing, Ham had this to say;

“I traveled but I’m back to my home.  I’m really glad I can come back.  I will work harder in ROAD FC than I have before.  It’s a pleasure to be in a promotion with someone I love (boyfriend Kim Chang-Hyun, seed in ROAD FC $1 Million Lightweight Tournament).  I think the synergy will be doubled.  ROAD FC feels like my hometown.  Most of all Jung Mun-Hong (ROAD FC CEO) offered me better conditions than any other promotion.  So I decided to accept to fight in ROAD FC because I think he really appreciates the time I have spent as a fighter so far.”

Ham (16-8) joined the UFC roster in December of 2014 in a losing effort against Joanne Calderwood. After nearly a year away, Ham returned to South Korea in November of 2015 and picked up a much-needed win over Cortney Casey. After going 0-2 in 2016, Ham was released from the promotion early this year.

Her last two losses in the promotion were controversial. Narrowly losing decisions against both Danielle Taylor and Bec Rawlings.

Prior to the UFC signing, Ham fought exclusively in South Korea and Japan. She spent the majority of her career fighting under the Smackgirl, Jewels, and DEEP banners. Along the way, she picked up big wins against fellow WMMA veterans Mei Yamaguchi and Hisae Watanabe.