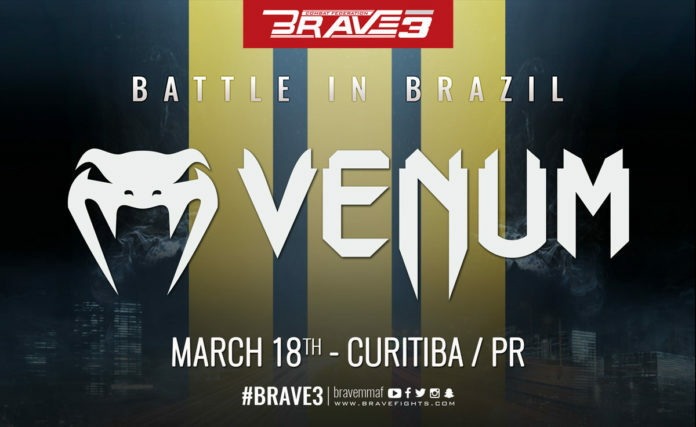 Combat sports apparel and equipment manufacturer Venum has signed the deal with Brave Combat Federation to be the official fight gear partner for Brave 3: Battle in Brazil. A longtime sponsor of many MMA legends including UFC fighters, the Brazilian fight gear company is one of the primary brands manufacturing apparel and equipment for various combat sports including mixed martial arts, boxing, Brazilian jiu-jitsu and karate. The announcement came as a huge win for the Bahrain based global MMA promotion as
Venum, had already decided not to work with any Zuffa fighters due to the new Reebok deal.

Earlier this year, Venum was elected as the best MMA Clothing and Equipment Brand of the Year in the World MMA Awards 2017. Brave Combat Federation will be hosting its first event outside Bahrain, by choosing to host at Curitiba, Brazil on 18 March, 2017. The event will also feature guest commentary by UFC veteran, Frankie Edgar.

“Brave Combat Federation is overwhelmed by the response from Brazil. When it comes to MMA in Brazil, history cannot ignore the iconic combat sports apparel and equipment manufacturing brand from Brazil – Venum. We are glad to join hands with Venum and we look forward for an event that will be yet another landmark in the history of MMA in Brazil. Brave is one of the fastest growing mixed martial arts promotions in the world and this partnership takes us one step closer towards our goal.”, commented Mohammed Shahid, President of Brave Combat Federation.

Brave 3: Battle in Brazil, will be hosted at the Max Rosenmann Arena. The event will also feature the first ever Indian fighter to compete in an international promotion in Brazil, the two-time national champion Pawan Maan Singh, who is set to face America’s James Pou.