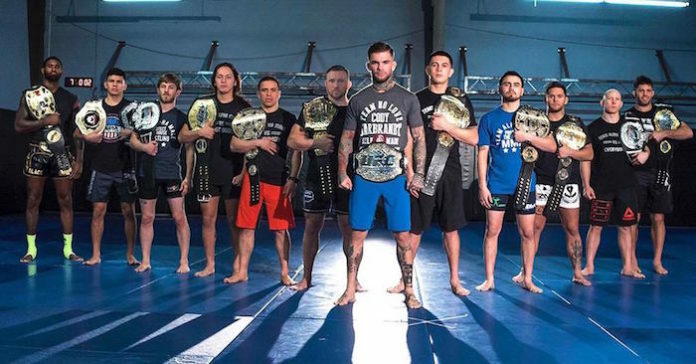 Update: Joseph Morales’s title fight has been cancelled. He will now fight Sean Santella on Match 25th on CFFC 64 in San Diego, California.

The card will have Dana White in attendance. According to a source if Morales wins he is “highly likely” to be signed by the UFC immediately after the fight.

A lot of MMA action is going down on March 18th, including UFC Fight Night 105 as well as WSOF 35, but the UFC scouts may have their eyes on Global Knockouts 9 taking place the same day.

On that event, top Team Alpha Male’s #27 prospect Tyler Diamond and #9 prospect Joseph Morales are fighting in what could be both their auditions for the UFC.

Morales is set to defend his GKO flyweight championship. He has long been considered one of the best prospects in MMA and is likely on the doorsteps of the UFC. Teammate Urijah Faber has been campaigning for Morales to join the UFC for a while.

Tyler Diamond on the other hand is a Featherweight prospect who has been making a lot of noise. He was a highly touted wrestler at North Dakota State who turned professional in 2015.

Diamond will be fighting on his 26th birthday, and if he gets the win, perhaps his present could be a phone call from UFC president Dana White.

Diamond is fighting 18-25 Ran Weathers because they’re having a lot of trouble finding him opponents.

Morales was practically born in Team Alpha Male according to teammates. He’s been training there for a long time and is one of the most complete fighters the gym has ever produced.

He’s good in every area, whether it be on the ground where he’s a very good wrestler as well as black belt level jiu-jitsu skills or standing where he is very clean. This will be the first defense of his title since winning it against Josh Pavia last year.

Morales is only 22. He’s going to get a lot better, and that’s pretty scary to think about.

Tyler Diamond is a powerful wrestler who has a serious strength advantage over almost any opponent he has faced.

He takes guys down and dominates with ground strikes. He has the real knack for passing opponents guards and getting into position to finish fights.

One thing to watch out for in this fight is to see if he has improved on his striking. If he can improve in that department, he should be a top 10 talent in the UFC very soon.