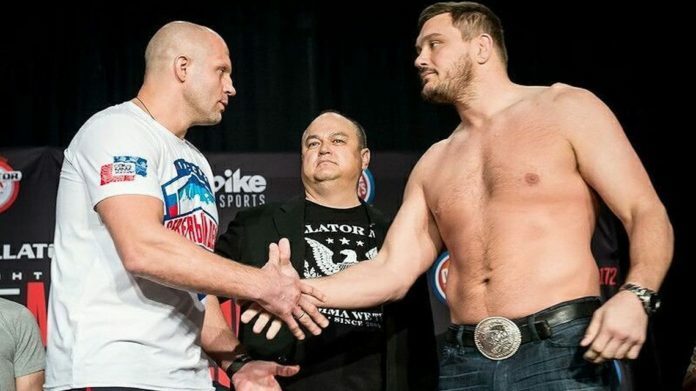 Earlier today it was announced that light-heavyweight veterans Wanderlei Silva and Chael Sonnen would headline Bellator NYC, but no other bouts were announced. The card has now received its co-main event, and, at least as of right now, the card is looking worthy of being Bellator’s return to pay-per-view.

The co-main event will feature the Bellator MMA debut of legendary heavyweight Fedor Emelianenko. He will take on former NFL defensive tackle Matt Mitrione in a bout that was rescheduled following a last-minute cancellation hours before their scheduled Bellator 172 main event in February.

The bout was first reported by The New York Post.

Emelianenko (36-4, 1NC) is widely regarded as the greatest heavyweight fighter of all time. Following a shocking loss to Dan Henderson in 2011, the great Fedor rebounded with three-straight wins as he took out Jeff Monson, Satoshi Ishii, and Pedro Rizzo. Following the quick win over Rizzo in 2012, Fedor retired from MMA. He has since returned to the sport. The legend has picked up wins over Jaideep Singh and Fabio Maldonado under the RIZIN and Fight Nighs Global banners.

Mitrione (11-5) has spent the entirety of his MMA career in the UFC prior to being released in early 2016. Following losses to Ben Rothwell and Travis Browne, the former NFL‘er was cut from the promotion. He wasted no time in signing with Bellator MMA, though. Since debuting in June of last year, Mitrione has knocked out Carl Seumanutafa and Oli Thompson. He remains 2-0 in the promotion.

With the Bellator MMA heavyweight title currently vacant, every heavyweight bout matters and is of vast importance. This is likely the most high-profile match-up Bellator has booked for the division as of now, so this one just might be the most important.

Bellator NYC is set to take place on June 24 at the world-renowned MSG venue in New York. The main event features long-time rivals, Wanderlei Silva and Chael Sonnen. Bellator CEO Scott Coker is promising “the biggest and the best” fight card in the history of Bellator MMA.

On that same day, just prior to the ‘Bellator NYC: Silva vs. Sonnen’ pay-per-view event, Bellator 180 will take place live & free on Spike TV. The numbered event and the pay-per-view will be two entirely different shows. No fights have been announced for Bellator 180 yet.