Through the first period of 2017, MMASucka’s top 40 prospects list has been a great success shedding light on a number of rising stars.

So far five of the top 40 prospects have signed with either the UFC or Bellator (15 were already signed to either promotion.) As of right now it appears three other fighters are right on the cusp of making the transition over.

But we’ve also seen several fighter who disappointed including Paddy Pimblett who lost his Cage Warriors Featherweight championship, Paul Craig who dropped a bout against Tyson Pedro, Jared Scoggins (brother of Justin) lost one, and Ryan Scope who surprisingly lost in February.

With that said, lets take a look at some of the highlights thus far.

Most Impressive So Far

#37 Mark Diakiese: Diakiese really shined in his third UFC bout against Teemu Packalen winning by knockout in under a minute. He landed an absolute perfect right hand that sent Teemu to the canvas. It was a very impressive performance.

After a so-so fight with Frankie Perez last year, some were down on Diakiese and thought he relied too much on athleticism and power lacking skills in the technical department.

Following the Perez fight, Diakiese linked up with American Top Team. Although he beat Packalen with a lot of flashy technique, it appears he’s at the right place. ATT has helped so many prospects like Diakiese and helped mold them into superstars, Diakiese could be the next.

#36 Paddy Pimblett: Oh Paddy… We were hesitant putting Pimblett on the top 40 list after his performance last year against Julian Erosa and his last fight against Nad Narimani showed why.

Pimblett lost his Cage Warriors Featherweight championship to Narimani in a unanimous decision loss in April. Pimblett just hasn’t improved and appears to one-dimensional at this point.

He’s only 22, and there has been murmurs that the cut to 145-pounds has been getting more difficult for the Liverpool native, so perhaps a move up to 155-pounds would be best for him.

Fighter’s on verge of signing with UFC/Bellator 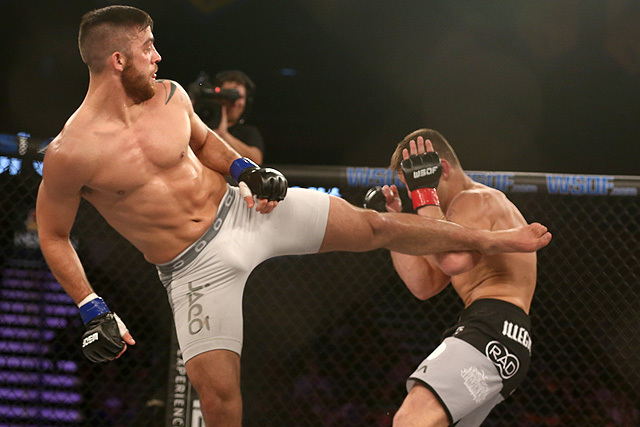 #35 Phil Hawes: Hawes was set to fight at WSOF 35 but his opponent was injured and Hawes was pulled from the fight.

#34 Grant Dawson: Dawson missed weight back in February and was pulled from his bout vs Chuka Willis. He has not been booked since.

#32 Sage Northcutt: Northcutt has yet to fight in 2017 nor has any indication of when he’ll fight been made public. He did have tonsil surgery in April.

#21 Dmitriy Sosnovskiy: Sosnovskiy was set to fight earlier this year but pulled out of his UFC debut with an undisclosed injury.

#20 Sergey Pavlovich: Pavlovich was set to fight in March but pulled out of the contest after the death of his mother.

#26 Mateusz Gamrot vs Norman Parke: Gamrot will fight former UFC veteran Norman Parke in a 55,000 seat arena for the KSW Lightweight championship on May 27. It will be the greatest challenge to Gamrot’s young career.