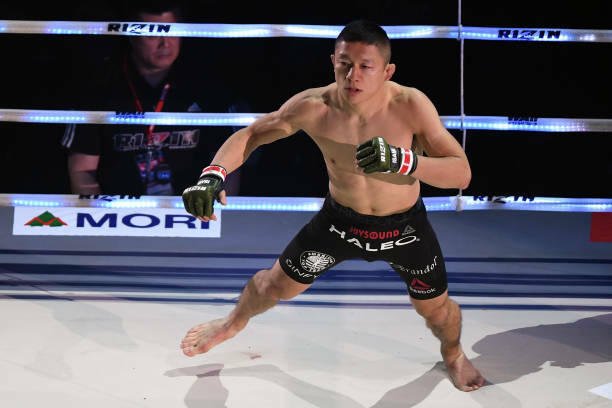 Last night at a press conference in Japan, the promotion began to announce match-ups for the first round of their bantamweight grand-prix, as well as separate bouts they are referring to as ‘super fights’.

Horiguchi is widely regarded as a top five flyweight in the world. He made his RIZIN debut in April following a highly successful 8-1 run in the UFC, only losing to P4P king Demetrious Johnson. Horiguchi used his stellar striking attack to defeat a very legit flyweight in the form of Yuki Motoya. He enters the stacked RIZIN GP hoping to prove to the world that RIZIN is an international, and legit, organization.

Tokoro has been a mainstay in Japanese MMA for nearly 17 years. Following a legitimate Fight of the Year contender with LC Davis at Bellator 135 in 2015, Tokoro signed with RIZIN. He has been with the promotion since the start and has a record of 2-1 while there. He has used his exciting grappling and submission ability to submit Kizaemon Saiga and Asen Yamamoto since joining the promotion. His sole loss comes at the hands of BJJ-Ace Kron Gracie.

Tokoro says many people advised him to not take such a dangerous fight, but he decided to do it anyway. The 39-year-old Japanese legend wants to see exactly where he is at in the sport by testing himself.

DEEP Bantamweight Champion Takafumi Otsuka enters the bout having won four fights in-a-row under the DEEP banner. He has picked up wins over Koichi Ishizuka and Toshiaki Kitada during that streak. Otsuka is primarily a grappler and has gone to decision 25 times in his lengthy career.

Apex MMA’s Anthony Birchak is a wrestler fighting out of Tucson, Arizona. He has had a shaky road to this tournament, having exchanged wins and losses for just about two and a half years now. Birchak entered the RIZIN ranks riding a win over Dileno Lopes in the UFC. In April he made his Japanese debut vs. Tatsuya Kawajiri, and, despite a losing effort, the promotion still seems to have high hopes for the 31-year-old.

Birchak tells Otsuka to bring his DEEP Championship so he can become the champion once he beats him.

Shooto Pacific Rim Champion, Keita Ishibashi has gone 2-0-2 in his last 4 bouts, having not lost since September of 2014. The Duro Gym fighter relies heavily on chokes to win fights, with seven of his eight wins being via submission due to a choke.

Germany’s Khalid Taha is an undefeated finisher fighting out of Dortmund, Germany. In his ten wins, he has finished eight of his opponents. Taha primarily gets the job done with his vicious striking attack, but also has a few submission wins on his resume as well. Fair FC and Top Ten Champions are among the promotions where Taha has won a championship.

The tournament will feature 14 fighters, 2 of which will receive automatic byes to advance to the quarter-finals. There are 3 more first round match-ups to be announced in the near future. Check out the full bracket below!

Along with the additions to the grand-prix, RIZIN announced other bouts for this card as well.

In a lightweight bout featuring two men who are both coming off impressive finishes vs. Daron Cruickshank, Satoru Kitaoka will face Yusuke Yachi in a classic striker vs. grappler match-up.

Japanese-Canadian Miyuu Yamamoto will look to pick up her first MMA win at the age of 42-years-old when she takes on Cassie Robb.

And finally, in what is sure to be an incredible contest; 18-year-old prodigy Tenshin Nasukawa will take on fellow kickboxing star Kizaemon Saiga. The ruleset for this bout has not yet been decided, it could be MMA rules, K-1 rules, or even potentially a mix of both.